Glasgow unbeaten in their last five matches at Scotstoun 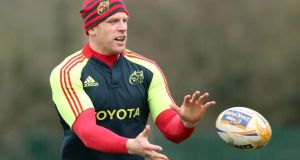 Paul O'Connell will start in the secondrow against Glasgow Warriors. Photograph: Cathal Noonan/Inpho

Simon Zebo trained well this week as Munster optimistically look towards their Heineken Cup match against Harlequins next Saturday in the Twickenham Stoop for his return.

The Irish winger came through non-contact training at Cork Institute of Technology, which fires Munster hopes, but it depends on his reaction to more rigorous tests next week which will determine whether the April 7th date arrives too early for him or not.

From the Munster of old you would put your house on taking something away from Glasgow tonight. But this is not. Even with Batman and Robin restored to the secondrow duties – half of that partnership, Paul O’Connell, instantly stamping his presence on the game last week with a try and a man-of-the-match performance against Connacht – Munster have obvious gaps which international players will fill next week.

Flanker Peter O’Mahony, secondrow Donncha Ryan, who is still nursing the shoulder he hurt in the Six Nations, and scrumhalf Conor Murray will not play due to their work loads over the last two months, Penney expecting a fresher international trio will be available to him first thing on Easter Monday.

Munster are seven points behind fourth-placed Ospreys with four matches left. Tonight’s game again is probably not the one Penney would have picked for a win-or-bust effort but that’s where he finds himself.

With absolutely no wriggle room, the coach has kept changes to a minimum for the trip to Scotstoun, where Glasgow are expecting their biggest crowd of the league.

In the backline Johne Murphy comes onto the wing in place of the injured Denis Hurley, who tweaked a hamstring last week against Connacht and didn’t feel comfortable about playing after Tuesday training.

Scrumhalf Duncan Williams starts with Ronan O’Gara, while in the pack Mike Sherry and BJ Botha come in ahead of Damien Varley and Stephen Archer respectively. Paddy Butler comes into the backrow for the injured Seán Dougall, who damaged knee ligaments and will be out for six weeks.

Penney would have seen how close Gregor Townsend’s side came to upsetting Leinster in the RDS last Saturday and Townsend departed quietly simmering.

In that vein Townsend has ripped his team apart and rebuilt it, in all making nine changes from last week, just one of those positional. He has recalled Scotland fullback Stuart Hogg, right wing Seán Maitland, prop Ryan Grant and lock Tim Swinson to the starting lineup.

Ruaridh Jackson, Seán Lamont, Ryan Wilson, Jon Welsh and Pat MacArthur have also been promoted from the bench, while Alex Dunbar and Tommy Seymour picked up knocks in Dublin and will not be involved in the tie.

“We weren’t as accurate as we’d have liked against Leinster and we know we have to improve, especially defensively,” said Townsend.

“Our passing also needs to be much better. The focus at training this week has been very similar to how we prepared for our clash with Ulster a few weeks ago; this is a very important match for us and we’ll need to be at the top of our game.

“Munster are a strong defensive team so we must take any opportunities we get. Despite being sixth in the league, they are only seven points off the top four and they can still qualify for the play-offs.

“That makes them extremely dangerous opponents and we must approach the game in the right manner.”

Glasgow have won their last five matches in all competitions at Scotstoun since losing 6-9 to Castres in the Heineken Cup in December, while Munster’s nasty away record hasn’t allowed them win outside of Ireland in the PRO12 since they beat Cardiff 24-18 in November.

Really, there is not a lot to suggest they are going to improve that poor streak against a Glasgow team looking for silverware.

Dundalk remain pointless after losing fifth group game at Molde 22:48
England’s balcony messages ‘100% in spirit of the game’ – Eoin Morgan 22:30
Former Cavan captain confident his county can compete against Dublin 23:07
Fans return as Arsenal win big against Rapid Vienna 22:31
Connacht use visit of Benetton to give as many players as possible match time 20:51
Crossword Get access to over 6,000 interactive crosswords