Munster’s Niall Ronan out for up to six months 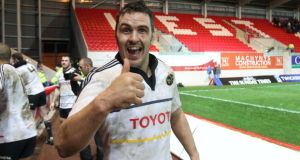 Munster flanker Niall Ronan is out for up to six months with a knee injury. Photograph: Billy Stickland/Inpho 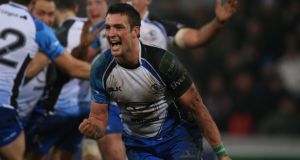 Munster’s Niall Ronan has been ruled out for up to six months having failed to recover from a knee strain sustained in training in November.

The flanker underwent a scope last Friday and required “cartilage repair work”, according to the province. He is expected to be sidelined for “approximately four to six months”, meaning he will take no part in Ireland’s Six Nations campaign and, perhaps, the remainder of Munster’s season.

In the shorter term, BJ Botha (right knee) “remains hopeful” of a swift return but coach Rob Penney has already “ruled him out of consideration” for Friday night’s derby game against Connacht at Thomond Park.

The province reported today that Duncan Casey, Dave O’Callaghan and Tommy O’Donnell are following standard return to play protocols after suffering collisions in the late win over the Scarlets on Saturday night, while scrumhalf Conor Murray (knee) and lock Donnacha Ryan (knee) are also unlikely to feature this weekend.

The duo are, however, involved in an Ireland camp at Carton House, alongside Peter O’Mahony, Paul O’Connell, Dave Kilcoyne and Keith Earls.

“Paddy Butler (right thumb) returned to full training today and Simon Zebo (foot) continues with his own rehabilitation running,” said a Munster statement. “Ian Keatley (hip/dead leg) returned to limited training after being rested last week and Damien Varley, who was a late withdrawal from the Scarlet’s match due to illness, is continuing with his recovery but is expected to train later in the week.”

It concluded: “Mike Sherry is resting his left knee after a successful operation last Friday and Luke O’Dea (thumb) continues with his rehab work.”

Connacht have injury concerns of their own after ending their eight-game losing streak with a 14-11 win over Newport Gwent Dragons last weekend.

Centre Dave McSharry, who left the field early on Saturday, has sustained a high ankle strain and been ruled out of the match in Limerick, while flanker Jake Heenan, who suffered a shoulder injury, is “unlikely to be involved”.

Hooker Seán Henry missed the win over the Dragons because of a neck strain and is still unavailable.

Prop Ronan Loughney and scrumhalf Frank Murphy, however, are back in training this week and “available for selection”, alongside secondrow Aly Muldowney, who has recovered from illness.

Penney’s men have not lost to Connacht in nine fixtures. The table-toppers were last beaten by Friday’s opponents in December 2008.

Leinster coach Matt O’Connor has “issued a clean bill of health” ahead of their derby with Ulster at the RDS on Saturday (6.45pm).

However, the coach might be without a number of frontline players who were also included in the Carton House camp.

5 Sarah Stirk: From pro tennis dreams to the face of Sky Sports Golf