Munster not planning a response to Maori All Blacks’ haka 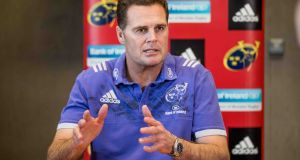 There are no plans for a choreographed response to the Haka this Friday, according to Munster coach Rassie Erasmus.

Munster welcome the Maori All Blacks to Thomond Park on Friday evening, the same venue that the province responded to New Zealand’s Haka so memorably in 2008.

Munster came agonisingly close to beating the All Blacks for the second time that day, but the atmosphere before the game went to new levels when New Zealand natives Doug Howlett, Rua Tikopi, Lifemi Mafi and Jeremy Manning responded to the traditional war dance with one of their own.

Last weekend in Chicago, Ireland formed a figure of eight in memory of former Munster head coach Anthony Foley as New Zealand performed the Haka, but Erasmus says Munster’s Kiwi natives Tyler Bleyendaal, Rhys Marshall and Francis Saili have nothing up their sleeve for Friday.

“No, I don’t think we have enough foreign guys that can do a Haka,” Erasmus said. “No, look, I’ve been involved with a Haka few times and it’s just a great thing to be part of and to admire.

Munster have been in scintillating form in recent week and have registered wins over Glasgow Warriors, Ulster and Ospreys - they even kept an Ospreys side that had scored 37 tries before last weekend scoreless.

But the Maoris warmed up for Friday’s game by beating USA Eagles on a 54-7 scoreline. Erasmus was not inclined to pick out individuals, but he sees them as a powerful team with plenty to play for.

“There is just exceptional right through the team. That is my honest opinion,” said Erasmus. “It is going to be a hell of a challenge. We have seen what they did to the USA.

“I just know from history, coaching a lot against those kind of boys, they are just wonderful attacking players with great physicality and wonderful skills to watch.

“The nice thing for our players is to feel those skills, to play against players like that is, sometimes smaller guys he tries to sidesteps you and beats you, not many people get the experience to feel that and sometimes you tackle him back and you have won that little battle.

“We will analyse them and we will try our best to try and beat them. There is nothing special planned for them or anything like that. We will look at certain areas, but in all departments they are very strong. It will be a challenge right from the scrums through counter-attack, it will be a really tough game.

“Obviously we will try and beat them. We know that is a tough ask. It is very exciting. Always we would like to try and win.”

Friday’s game will be played in front of a full house at Thomond Park with all 25,600 tickets sold for the match.