Munster have to believe they can find a way, even if it’s hard to see how they can 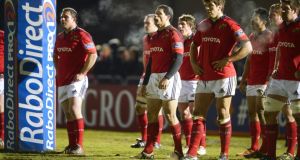 Dejected Munster players after conceding the final try against Glasgow in their Pro 12 clash last Friday night. They need to lift themselves for their clash against Harlequins.

I can’t remember the last time the Heineken Cup quarter-finals rolled around with such a deflated atmosphere. There is a different feeling to it this year, certainly from a Munster point of view.

Ulster will go into the weekend with more optimism but even so, there’s every chance next week there will be no Irish team in the semi-final. That hasn’t happened since 2007, so if it does happen to come about in a year when the final is in Dublin, it will be a real opportunity missed.

It feels strange for there to be so little excitement about it. The poor Six Nations hasn’t helped, of course, and the fact that Leinster aren’t involved means that probably Ireland’s best hope of winning it is gone.

Ulster have the strength and experience in their pack to come through this weekend but you’d still say that if Leinster were getting ready for a quarter-final this weekend, they’d be higher up the pecking order than Ulster are. That’s even allowing for a very good win by Ulster last weekend that showed that they have a serious bit of steel about them.

Munster’s form is very worrying. This game against Harlequins looks a bit like the Miracle Match against Gloucester in 2003. On paper, it seems very unlikely that Munster will come out the other side of it. ’Quins are packed with talent, they’re physical and clever and they will relish putting Munster away. If Munster manage to pull off a victory, it will be one of their great all-time results.

The difference with 2003 is that Munster are not playing well. Back then, when we had to produce something from somewhere, we were coming off the back of a decent enough run of form. We had lost away to Gloucester and Perpignan but we were still playing reasonably well. We knew we had it in us to find a big performance against Gloucester, whatever about the result.

Can these Munster players say the same this weekend? You wouldn’t have thought it to watch the hiding they took off Glasgow last Friday. Conceding 51 points away from home in the last game before a quarter-final doesn’t bode well. It’s not the kind of result you can just brush off. You can’t just shrug and move on. You have to spend some of your week dealing with it, thrashing it out, getting it out of your system. That takes energy and time away from you main goal for the week, which is getting ready for Harlequins.

Happens again
But it has to be done, otherwise you risk it happening again. And if it happens again this weekend, Munster’s season is over. No Heineken Cup, no Rabo Pro-12. Rob Penney’s first season will be seen as a disaster for everyone involved. That might sound unfair but that’s how it will be seen.

The odd thing about the Glasgow game was that Munster were actually pretty impressive in the first half. Their organisation and application were good and there were some promising signs in the performance. But it totally disintegrated in the second half. Mentally, you could see that some of them went to pieces. Everything Glasgow were trying came off, everything Munster were trying got heavily punished. Their lineout was a shambles, their scrum was a shambles, they seemed to knock everything on. Three intercept tries tells its own story.

I’ve played in games like that before. All you want is for them to end. You find yourself looking around in disbelief at what is happening, especially when you give up really soft tries. You don’t give up that many points without your structure breaking down, yet it feels like no matter how hard you try the situation just gets worse. I felt a little bit sorry for the players the other night. A game like that is a nightmare you just want to end.

The week after Wasps beat us in the Heineken Cup semi-final in 2004, we went to Cardiff for a Celtic League game. Everybody was down in the dumps after losing such an epic game in Lansdowne Road but we had to try to pick ourselves up to play the Blues. It didn’t go well – we lost 61-14. I was embarrassed to be a part of it, embarrassed for what a scoreline like that said about me and my team.

That game sticks out for me because I was coming back from injury and trying to get game-time before the end of the season so I could go on Ireland’s tour to South Africa. We made nine changes from the Wasps game and we got annihilated. I just remember wishing to God the final whistle would go, even though there was still 20 minutes to go.

In a game like that, your effort doesn’t lessen but your priority changes. You go from trying to win the game to trying to keep the score down. You concentrate on trying to stop the other team from playing rather than executing your own gameplan. It’s damage limitation basically.

Different game
Once that emphasis changes, you’re playing a completely different game. And the further you get away from what it is you want to be doing – attacking, putting them on the back foot, trying your own moves and ideas – the more encouragement you give the other team. That’s how the scoreboard gets out of hand and how you end up losing 61-14. Or 51-24.

Those Munster players would have had a tough weekend after a defeat like that. It was on Friday night in Glasgow so they would only have been getting home around three or four o’clock in the morning. They would have spent the weekend in bad form, annoyed at what happened and worried about how they were going to turn it around for next weekend. It was striking how easy they made it for Glasgow, how little leadership there was, how few guys were putting their hands up and trying to be the one who made the big turnover or the big tackle.

They have to be professionals now. The season has been poor but there have been a couple of decent performances and they need to latch onto those and reproduce one of them on Sunday. Go back to the Saracens game and look at the breakdown work Munster did – a repeat of that will give them a foothold in Sunday’s game. Paul O’Connell being back is a huge boost and it looks like they’ll have Simon Zebo too. There are positives to find.

But above all, what Munster need to do is rediscover some pride. This is an opportunity for them. Nobody expects them to win, nobody thinks they can pull it off. They owe it to themselves to change that. They have to find the right attitude and application to do it. No matter whether they win or lose, they have to show the red jersey means something to them. They have to put a bit of pride back into it. If the season fizzles out, then that doesn’t say very much for what the jersey means to them. They have to be able to say in the dressing room afterwards they did themselves justice.

The stands
Never mind the outsiders. Never mind people in the stands giving out about them or even people like me writing about them. Pull the circle tight and do it for each other, do it for themselves. They must believe they are capable of it, purely because they have no choice in the matter. They have to believe that they’re part of something, that what they do can make a difference in people’s lives – not just the people that follow them but the people around them. And most of all themselves. Pull off a big win on Sunday and it changes everything. The Glasgow game will be dead and buried, the season will suddenly have a bit of hope. They have to believe this is a chance to make something of their season.

The prospects for Ulster are far better. Even without Stephen Ferris, they still have a pack that is strong and experienced enough to physically test any team at the moment. With Ruan Pienaar orchestrating things and a backline outside him that offers threats from everywhere, they definitely have it in them to beat Saracens. Beating Leinster last weekend was something they had to do to give them confidence for this and they took care of it very well. They’re a really serious outfit now.

Things didn’t turn out too well for them the last time they played at Twickenham but that won’t have any bearing here. That final against Leinster maybe came a bit early in their development but they have matured since. Saracens don’t play flowing rugby and that will suit Ulster. Their physicality gives them a real chance of meeting Saracens’ power with power of their own. They have a really good chance of coming through. I only wish I could be as optimistic for Munster.

Declan Kidney still has a lot to offer

International rugby is a tough business and it was probably fair enough that Declan Kidney’s time with Ireland finished yesterday after the poor showing in the Six Nations.Even with all the injuries, you had to say the time was right for a change.
The frustration of the Irish public and the general atmosphere when it comes to the team had turned against him. When it gets to the point where it becomes toxic, you only need a few bad results to bring it to an end. It’s time for a new voice.

The Grand Slam will be what he’s best remembered for. It’s just a pity that in the years that followed, Ireland were never able to build up any consistency. There’s very little forgiveness for a team that every once in a while makes the public hopeful with a big win, only to throw it away with a bad loss soon after.

In the end, Declan’s luck ran out and there were just too many poor results.

I just hope that this isn’t the end of his involvement in Irish rugby. We have made a bad habit of losing home-grown experience and not finding a place for coaches in the past. Declan has knowledge and experience built up over decades in the game and he still has plenty to offer.