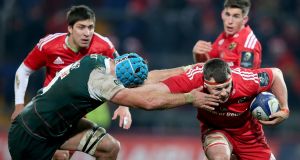 Richard Cockerill, the Leicester Tigers director of rugby of all people, denied that this seemingly comprehensive defeat of the hosts on Munster soil was confirmation of an unmistakable trend.

Leicester, lacking the power of a Saracens pack or the razor slicing London Wasps backline, became the third successive English club to leave these shores with a comprehensive Champions Cup victory this season.

“The English sides are growing...but that wasn’t the reason why we lost. We didn’t execute.”

Ian Keatley had a night to forget that he probably never will, and while Munster coach Anthony Foley deemed one refereeing decision by Romain Poite to be a “disgrace”, defeat came from within.

The opening 40 minutes was not a time to blink but Keatley did just that when missing a penalty in front of the posts that would have made it 9-6 on the half-hour mark.

By the interval Leicester had amassed an 18-6 lead. Owen Williams kicked beautifully and with assurance while Vereniki Goneva’s try was followed up by a fortuitous grab and dive by kiwi lock Mike Fitzgerald off a sloppy lineout throw by Niall Scannell.

Munster rallied after half-time with Conor Murray snatching a fortuitous try before a Keatley penalty made it 18-14 after Marcos Ayerza was sin binned for a late tackle on the Ireland scrumhalf.

That 10 minutes numerical advantage ended 3-7 to Leicester after Ben Youngs profited from a poor Keatley clearance to race around Robin Copeland for another soft score.

Energy and determination was eventually rewarded by the class of Keith Earls. The winger’s dancing feet got his forwards close enough for Mike Sherry to bludgeon a path to the line.

Keatley missed the conversion. Any hope of a bonus point disappeared within seconds as Francis Saili picked up CJ Stander’s knock on from an offside position to allow Thomas Bell make it 28-19.

There was most certainly not 22,261 people in the stadium but nonetheless the sound of Swing Low reverberating down from the nose bleeds must have been harrowing for the freezing Munster faithful that remain.

“Munster are very similar to ourselves,” said Cockerill. “They have been incredibly successful but once in a generation players have come and gone in recent years. Same for ourselves. It takes a little bit of time to find your feet again.

“We are starting to do that...I understand the pressure that Anthony feels..Munster are a good club, I think they will rebuild.

“It all goes round in cycles...I think the Premiership is very strong. Every time in the Premiership we are playing for keeps. That keeps us nice and sharp when we come into Europe. Leicester will be here in 100 years time and Munster will be here in 100 years’ time. We are built around the city and the fans. We are very traditional. It’s important to keep that. Other clubs, French or English, go down a different path, that’s not a criticism, it’s a different model.

“What clubs like ourselves and Munster have is pretty special and you want to keep that. Now, there is going to be a bump in the road at times...You have to ride that storm and try and build for the next two or three years.”