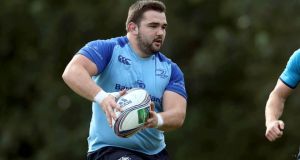 Fergus McFadden and Kevin McLaughlin will both make landmark 100th appearances for Leinster tomorrow in their Heineken Cup clash with Castres Olympique at the RDS (3.40).

Leinster coach Matt O’Connor makes one change to the starting line-up with Martin Moore replacing the hamstring victim Mike Ross. The Lansdowne and Ireland underage international did a fine job when he came on in the victory over the Ospreys last weekend.

Jamie Heaslip leads the team once more on his 170th appearance and he is joined in the backrow by McLaughlin and last weekend’s Heineken Man of the Match Sean O’Brien.

The backline is unchanged which means that Jimmy Gopperth will make his home European debut for the province alongside Brendan Macken (lining out for the 30th time in Leinster colours) who partners Gordon D’Arcy once more at centre.

Michael Bent has recovered from injury to take his place on the replacements bench alongside four other Ireland internationals. Saturday’s match is a sell out and there will be no tickets on sale at the ground.