Mils Muliaina on wheels can feed Connacht’s hunger for success

Former All Black is the centre of attention out west already 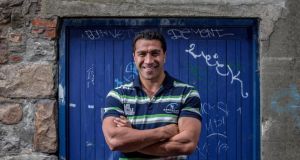 Mils Muliaina: “I just can’t get over some of the talent I’ve seen here. There’s some massive talent here and I’m looking forward to working with them.” Photograph: James Crombie/Inpho

His face already adorns billboards in Galway promoting Connacht’s season ticket sales. “Mils has signed up. Have you?” A province expects and all that, for it’s not often that an All Black centurion pitches up hereabouts.

After scarcely a week with his new province, Mazda, Connacht’s title sponsors for the last three seasons and this season their car sponsors, unveiled Muliaina as their official brand ambassador in the Sportsground. Mils on wheels, so to speak. They even provided a fleet of cars for the media to drive from Dublin and elsewhere in order to meet the ex All Blacks full-back.

A modest, pleasant and eminently patient man, Muliaina is only one of only five players to have played a century of Tests with the All Blacks. “Only in the last couple of years I have reflected on that and realise ‘man, I can’t believe I’ve actually done that, and know how enjoyable it actually was and the environment that I have been in.”

Here to leave a lasting imprint, Muliaina has clearly bought into the Pat Lam/Connacht cause. “Hopefully I can pass some of that knowledge on. People in New Zealand will say ‘why wouldn’t he do it in New Zealand?’ But I can just can’t get over some of the talent I’ve seen here. There’s some massive talent here and I’m looking forward to working with them.”

Lam has invested plenty in Muliaina’s potential influence as an expweirenced figure amongst a collection of talented young backs, and typical of this ultra positive head coach, his enthusiasm has scarcely dimmed after just a week working with Muliaina.

Lam already says Muliaina’a input has exceeded his expectations, joining the leadership group, contributing a ideas on and off the pitch and although in rehab due to the elbow injury which will sidelined him for the first two months or so, he has still run with the squad and begun speaking in the huddles.

“I think they were more attentive than they were listening to me,” Lam confesses cheerily. “He’s already been talking with Darragh Leader and Robbie Henshaw one on one. And Andre Bell (backs coach) has been great with that, because Andre wants him to have that sort of role. We’ll probably get him to run the water at the weekend because the boys are like sponges,” adds Lam, no pun intended, vis-à-vis the Pro12 opener at home to the Dragons on Saturday.

“During the week I had a mini team challenge with a band night,” says Lam, “and the boys had to dress up and do some lip syncing. He’d only been here two days but he joined and got partying, and was up there singing and dancing. His group had to do a boy band, and he was part of it. I was just sitting back and looking at it, Darragh leader, Robbie Henshaw, Mils Muliaina, Craig Ronaldson, Rodney Ah You and Jake Heenan, all singing and dancing. He didn’t have to but he just said he’d join in. And I think that sums him up.”

While Lam still hopes Muliaina has a significant impact on the pitch, he believes his biggest contribution will be in the development of Henshaw and Leader.

“They are two guys who I believe can both play ‘15’ and ‘13’, and in my view will play for Ireland, and be superstars for Irish rugby. Yes we want Mils playing well and being amongst it, and for him that’s a priority, but for me if he brings those two to another level, that will have more benefit in the long term.”

The biggest disappointment of the summer tour is that Henshaw was ruled out of the two Tests against the Pumas. “Robbie has got time,” observes Lam. “Robbie kicks of his playing season the week after next and obviously his target is to be involved in the November tests. The S & C department have put nearly two kg on him. The medical department has done a great job and then there’s all the skills the coaches are doing with him. There’s a lot been said about Robbie Henshaw and our responsibility is to ensure our structures and systems are bang on to allow him to actually perform and perform at his best. Mils is part of that and the benefits will be accrued for Connacht and Ireland.”

With three-year deals, Bundee Aki and Tom McCartney should ultimately leave a longer imprint on the pitch, but similarly won’t be playing until November due to ITM Cup commitments with Waikato and Auckland.

“It’s not ideal but we knew that when we signed them, and that’s part of the reason we could afford them, because we’re not paying them until they get here. They miss the first eight or nine games but there will still be another 18/19 to go,” adds Lam, reasoning that the new arrivals will be a timely in Connacht’s stated aim of breaking into the top six or seven and qualifying directly for the European Champions Cup. “Normally at that time of the year, an injection of quality makes a massive difference.”

Lam acknowledges that while Connacht should improve, so too should most other teams in an altogether more competitive Guinness Pro12. Mindful that “competition and depth kills us the most,” Lam also admits: “for what we have there’s no way we should finish there (top six/seven). But if we can be world-class in our structures and systems, we can over achieve, and for us to get there would be fantastic. We understand that everyone else is doing the same and that’s why I think this competition is at an unbelievable new level. Everyone knows the pressure is on from day one to start building points.”

Starting with the Dragons here at 5pm on Saturday, this is especially true of Connacht.

1 Golf in Level 5 Covid restrictions: Clubs still waiting to hear if they can remain open
2 Hugo Keenan could start in changed Ireland team against Italy
3 Man United’s latest Parisian party more impressive than heist of 2019
4 Gordon D’Arcy: Ireland don’t need to do a Finn Russell on it
5 Underage and minor GAA could be stopped under Level 5 Covid-19 restrictions
Real news has value SUBSCRIBE

Wasps given all clear for Premiership final after latest Covid-19 tests 10:44
Man United’s latest Parisian party more impressive than heist of 2019 09:45
Lions to play Japan on home soil before tour to South Africa 09:26
Tiger Woods in the groove as he plots a path to Augusta 09:22
Underage and minor GAA could be stopped under Level 5 Covid-19 restrictions 08:53
Crossword Get access to over 6,000 interactive crosswords