Matt Williams: Joe Schmidt can make the most of loss 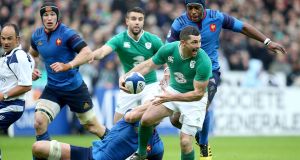 Rob Kearney was the only Irish player to offload against France and even that went straight to the opposition. Photograph: Dan Sheridan/Inpho

Of the new voices that are clamouring with outrage at Ireland’s lack of attacking savvy, I wonder how many would be protesting if Ireland had scored one more point against Wales and two more against France?

What if Ireland were now two and zip, with the Triple Crown, the Championship and the Grand Slam all still a possibility? Would they be crying into their keyboards?

Ireland could so easily have been on top of the Championship, going to “Twickers” with a spring in their step, knowing a good kicking of the old enemy would see them in a commanding position.

Would the new found zealots for running rugby be standing by my side?

I doubt it. And they would be wrong.

Winning last year’s Six Nations paper over the cracks that were there for all to see because winning is an opiate for the masses. Not winning this Six Nations may be the catalyst that produces a quality, external evaluation of the team and changes the Irish philosophy in attack.

I’ve been writing about Ireland’s poor attacking systems for over a year. I have been sent messages, more times than I care to remember, such as, and I quote: “Williams shut up! (I did not suggest it was an eloquent statement, but this is the quote.) We will take playing bad rugby, kicking goals, not running the ball and winning any day of the week! You could not coach a grapevine over the back fence, now your (sic) telling us how to play. Why don’t you go and get . . . ”

Now, my phone is ringing for radio interview requests, my erstwhile editor is allowing me to contribute my thoughts on a non-international match day and before you can say “whoshkabomy, let’s pick that rugby ball up and run with it”, I have gone from a harping old never was, to a maybe he might be on to something.

And all because Ireland couldn’t score three points in two games. How fickle the sporting world is. In 2015, playing crap rugby, Ireland won the Six Nations by a whisker. All is well with the world and God is in his heaven. One year later, playing the same crap rugby, but losing by the same facial hair and the world’s an expert.

I was moved to rummage around in an old filing cabinet under my stairs to dig out the New Zealand Rugby Union External Review following their defeat at the 2007 World Cup. It is perhaps the best rugby document I have ever read. Its wisdom, maturity and the common sense proposals were the foundations of New Zealand winning the next two William Webb Ellis Trophys.

Typical of the Kiwis professional and business-like approach to their rugby, the document was not on Wikileaks nor was it clandestinely smuggled into my hands. I was simply given a copy because I asked for it. It was given with the spirit of rugby at its heart. I hate to admit it, but I really admire those bloody New Zealanders.

Unlike the sensationalism and simple-minded emotion of the New Zealand media, who demanded heads on plates, it recommended keeping the coaches – who subsequently won the World Cup in 2011. But it also recommended reviews and evaluations of just about every system in the national team’s set-up. Everything from the internal team leadership, to the nuts and bolts of the defensive and attacking systems.

Joe Schmidt is an excellent coach but he is not being held to account for his poor attacking gameplan. I hope Joe stays until the next World Cup, but only if somehow the IRFU can insist on an external evaluation of his programmes.

If there is a detailed review document of Ireland’s last World Cup, we may have to wait for Wikileaks to dig it out. However, the review was conducted internally and I don’t believe it exists on the same detailed level as New Zealand 2007 masterpiece.

To suggest injuries were the only reason for Ireland’s failure last autumn and their continued inability to score enough points to win games is snake oil. The lack of scrutiny from the Irish media on this issue is hugely disappointing. The facts for Ireland could not be starker.

So far in the Six Nations in attack Ireland have the lowest amount of ground gained of any team at only 605 metres. Yet, they have the second highest number of carries with 184. Meaning the players are carrying the ball frequently, with little success. The players are running the ball into a wall of defenders.

At last year’s World Cup, offloading was identified as the single most contributing factor to breaking defensive lines and Ireland can manage only three in two games? These terrible attacking statistics have been relatively consistent for over a year. Excuse me while I slide past the elephant in our midst.

As a former school principal, Schmidt will understand the merit of evaluations. If Joe is a big enough person to drop his ego and admit this attack is wrong, simply because it is not working, then he has a chance. Research and planning are then required to create a new more tactically creative way of taking the ball forward. Multiple occasions Only on a very few occasions is losing at international level beneficial. If Joe reevaluates, then not winning the first two games has been a valuable learning experience.

If Joe fails to change, then facing England at Twickenham could be the least of the Irish worries. Looming in the coming months are South Africa and New Zealand on multiple occasions, then Australia as a booby prize. A very ugly train smash is coming.

A train smash of possibly six or more heavy defeats, that Joe may not survive. I hope for his sake and Ireland’s, change will come soon.

Bad weather wreaks havoc with hurling league format again 05:29
Irish Open: How to get there, how to get tickets, where to stay 05:00
Fermanagh fundraising chairman questions ‘equality’ of GAA 05:00
Mike Blair expects Italy will face a ‘confident’ Stuart Hogg 01:00
Robin McBryde: Farrell will be judged on results, not style 01:00
Here is your handy guide to sport on television this week