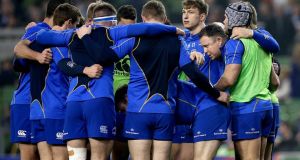 There’s no doubt which of the Irish provinces has the toughest fixture this weekend. Going down to Toulon is a massive job for Leinster.

The days when you might have caught Toulon napping are gone – they’re not disorganised anymore and it isn’t a case of players who are just there for the money.

Over the years, there was always a good chance you could go to one of these big wealthy teams and as long as you had togetherness and structure, you had a chance because they could be all over the place if things didn’t go their way.

But not anymore. Toulon are a serious, passionate and hungry side with a demanding owner and intimidating fans.

So if ever there was a game for Matt O’Connor to really make his mark with this Leinster side, this is it.

Return game
The stand-out performance of his time so far was the win in Northampton but the fact they lost the return game in the Aviva the following week took the sting out of it a little.

If they go to Toulon and win though, that’s the Matt O’Connor era well and truly started.

So far, there’s still a bit of a feeling that this is the tail end of the Joe Schmidt era.

That’s always the way when a coach takes over a successful team. Most coaches get their job when a team is on a downward spiral – or at best, when they’re stagnating. They come in to change the way things are done, to turn things around, to light a fire under everyone.

O’Connor hasn’t had that chance. He has come in to the most pressurised environment of all – a team that has had a recent history of winning trophies year after year.

When a team has been losing, it’s win-win for the new coach. Turn it around and you’re the hero. Fail to turn it around and people start looking at the players and wonder why coach after coach can’t turn them into a team.

But it’s so different when a team has been winning. Players become attached to doing the things that brought them success. They accept a new coach wants to put his stamp on things but at the same time, it’s only natural they don’t want things changed too much.

It could be something as simple as longer video sessions or pitch sessions. It might seem totally innocuous but when you’re used to doing something one way and you’ve been winning doing it that way, it can take a bit of getting used to.

There’s always a danger when a coach comes in to a set-up that has been working and changes things because he feels he needs to be seen doing something. It can be so tough to get that balance right.

But part of good coaching is talking to senior players and getting the group to go along with you.

You have to judge what the situation is. Are these guys used to a strict regime, where every little detail is planned out for them and where they’re expected to live up to that? If so, there might not be a lot of point in a coach coming in and taking a more relaxed attitude to things. That might be his natural style but to some extent, he has to go along with what has got the best out of this team before.

The players have a big responsibility too. When you’ve already won things – and most of these Leinster players have Heineken Cups to their name – you automatically have a bit of influence. So it’s up to you set the standards and to try to put the coach’s gameplan into action.

Ideas work
If you lose a couple of games early on, so be it. You can’t be expected to be happy about it but you’ve got to try and make the new man’s ideas work.

There will be a bit of bitching and moaning behind the scenes, purely because guys are so used to doing the things that won them the trophies in the first place. But you can’t stay in the past, no matter how glorious it was.

You have to believe in the coach. You have to trust him. It’s never going to be the exact same scenario as the previous coach and you have to adapt and evolve as you go. You get used to it.

If you’re lucky enough to have a career that lasts a decade or more, you’ll go through four or five different coaches and when a new one arrives you can’t afford to place too much store in what the old one did.

I had a few different coaches over the years who brought in changes that I personally didn’t agree with. It was always only little things – how many sessions we did in Cork, extra meetings for things I felt could have been sorted without us all having to go into a room together – but you have to give it a chance.

It’s all about getting better. Players come around quicker when they see that something is working. As long as you think that you are improving, little details like those won’t matter a damn to you.

That mentality is what makes good coaches want to come to places like Leinster. For all the pitfalls, any coach would choose taking over a successful team. You’re looking at players who are experienced, who are driven, who are hungry.

But a lot of success at that level is player-driven. You hear a lot of coaches say their goal is to make it a player-led game. Actual hands-on coaching is more important at a lower level. When you go to a place like Leinster, your big task is to keep the players working and keep their standards high.

Seed of doubt
Nothing helps that along better than big results. Leinster lost a couple of games early on, including a Rabo game against Munster in Thomond Park. That can put a seed of doubt in players. But it was away back in the first week of October and they were getting used to life without Isa Nacewa and Johnny Sexton. Nobody is going to panic over losing a game like that.

As they’ve gone on through the season, they’ve got better and better under O’Connor. He hasn’t changed an awful lot. If you wanted to pick something out, they probably kick a little bit more now than when Schmidt was in charge. The word coming out from Leinster was that he was going to be more defence-orientated than Schmidt was but I don’t think that has been really glaring or anything.

From the outside looking in, he has kept the ship steady and hasn’t made a lot of fuss. This is the weekend his impact will have the greatest chance of being seen. Leinster can win in Toulon, I have no doubt they can. There are very few teams in Europe that you could say that about but Leinster have the players to pull it off.

Leinster’s game is built around pace. They have the speed to put phases together and to move Toulon around.

Toulon are a big, physically-dominant team who kick a lot – they’re used to having a lot of possession, especially at home.

Leinster can match them up front and test them by moving possession quickly and exposing weaknesses in a Toulon side that isn’t used to not having the ball.

This is a huge game for O’Connor. If they lose, he probably won’t get much the credit for the good things Leinster have done since Schmidt left. He has brought through some good young players – the likes of Marty Moore, Jack McGrath and Jordi Murphy got their first games under Schmidt but he has brought them along and made them frontline players. But you still get the feeling a lot of people see them as Schmidt projects.

Statement result
If Leinster win in Toulon, that all changes. It will be a statement result, like when they beat Clermont in Bordeaux in 2012. One big result gives everybody confidence – players, the coach, the supporters . . . everyone.

It isn’t just a big result for this season – it stands to you for years. You refer back to it when other big games come on the horizon. That’s a big thing for a coach to be able to do. Instead of saying “Remember when you did this before” he can say, “Remember when we did it before”.

Win this weekend and you’d have to make Leinster favourites for the competition. Matt O’Connor’s Leinster, that is.