‘Mads is a brilliant footballer. I’ve no doubt that if he does step in, he can do a good job’ 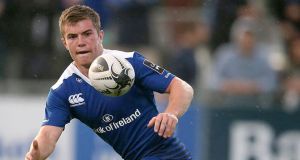 Joe Schmidt admitted it was a calculated risk. Isaac Boss and Kieran Marmion stay at home with Ian Madigan prepared to slot in at scrumhalf if the world falls in on the heads of Conor Murray and Eoin Reddan.

In that sense Schmidt’s acknowledgment of the danger makes him entirely innocent of belittling the nine position. There is a parachute and he has already explained it. The 48-hour rule to bring in players for injury allows him some latitude.

With former Leinster and current Australian coach Michael Cheika going with Will Genia and Nick Phipps and Matt Giteau fulfilling Madigan’s role as scrumhalf backup, it may be a case of great minds thinking alike.

But former hooker and current Japanese coach Eddie Jones has also opted to go with versatility and includes just two specialists as well.

The difference is Genia started his rugby career at scrumhalf, while Madigan’s outings there have been seen in the same way as sightings of Bigfoot.

But McGrath, who could team up with former St Michael’s graduates Ross Byrne and Cathal Marsh in Leinster for this week’s Pro12 game against Cardiff, is a scrumhalf, whereas Zebo is not.

“Well what everyone sees [at scrumhalf] is passing and kicking and stuff like that,” says McGrath.

“But it’s also scanning, reading the game knowing which options to pick and what players to hit when you are going around the corner – things like that. But Mads is a brilliant footballer. I’ve no doubt if he does step in, he can do a good job.”

The confidence in Madigan is heart-warming and loyal but in some ways blind. Although Schmidt told Madigan some time ago to find some familiarity with the position, it takes time to bed in, especially at World Cup level.

“Yeah it does take a bit of time to get used to it,” McGrath says. “But I’ve no doubt Mads has been slipping in and out with stuff at training. If he does that, he’ll have practised it before he goes anyway.”

Indeed, but how many times has Madigan “come around the corner” at international level or partnered Johnny Sexton from the other side or bullied the forwards in a rolling maul as Peter Stringer used to do? It may sound simple, but it’s not easy.

“No, it’s not,” he says cautiously. “The guy down the back [of the room, former Irish scrumhalf and current Leinster manager Guy Easterby] is giving me the eyes . . . It is a difficult position to play but Mads has controlled the game for years at 10 and I think he would be a good suit at nine if he is going to be there, obviously after the two guys.”

Schmidt’s decision is also taken in the light of having more players available than in previous World Cups as he has 31 for Cardiff and London, whereas Declan Kidney had one man less travelling to New Zealand in 2011. Boss, Reddan and Murray took the trip as the nominated specialist scrumhalves.

In the hapless 2007 World Cup from Ireland’s Bordeaux base in France, it was Boss, Reddan and Stringer who travelled and before that in 2003 Stringer, Easterby and current Ulster coach Neil Doak were selected.

Schmidt and Cheika, however, are not breaking the mould for squad selection. In 1999, when current Wales coach Warren Gatland was in charge, he took just two scrumhalves in Tom Tierney and Brian O’Meara. Ireland lost to Argentina that year in the quarter-final playoffs.