Liam Toland: Creativity need not be a dirty word for Ireland

This is not about mad risk-taking or massive passes, just the simple things, executed well 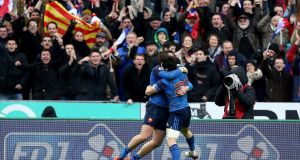 A Dublin taxi driver from a strong soccer background told me his grandson came home from his first rugby training session with three simple rugby principles: “You go forward. The ball goes backwards. And never, ever talk to the referee.”

My point? From these six principles, creativity arises. Ireland dominated much of the opening quarter last week but scored only three points. I noted much of the reasons why on Monday: the referee’s decisions, terrible weather conditions, etc.

So what is “creativity”? If we accept those six principles, then we can simplify further into two key principles: “create” space and then exploit space.

So, when Ireland had a sixth-minute lineout five metres from the French line, by going forward five meters a score would result. Creativity in this case can be by exploiting the space around the front or simply by powering through the ball receiver (maul) through the French to score. To me, it makes no odds which you chose – both create scores.

The big question is what happens if the first option – the front peel – doesn’t work. Ireland had committed four players to the Seán O’Brien breakdown with just three metres to go.

This is relevant, as one of Ireland’s major challenges last Saturday (and certainly next Saturday) was that France (like England) only committed one player to the O’Brien breakdown. Crucially, however, France had eight monsters concentrated in a seven metre space from the ruck.

So where was the space, and could Ireland “go forward” into that brick wall? The French had nine of their 15 players within seven metres of the O’Brien ruck, leaving six French players to cover the remaining 63 metres of Stade de France; one for every 10 metres!

A spill and a scrum

All very brave, but if Ireland continue to “go forward” thus, we will have no fit players available and we will not create suitable space to score tries.

Murray made 98 passes against Wales, 12 more than any other player. This was reduced to 66 against France. So where is he passing – or, better still, what activity is occurring around him to unlock the monster French defence?

I’m reminded of the phenomenal Puma scrumhalf, Agustín Pichot, who pulled the strings for Bristol against Leinster many seasons ago. He was awesome, but the activity around him created the opportunities.

Obviously, in any game where you share the ball with monsters, you have to build possession and plays that unlock their defence.

Bizarrely, the pack differential in weight was 13kgs in Ireland’s favour, but French ball carries were so much more effective, especially in the narrowest of gaps; crucial in terrible conditions.

In these conditions, a powerful lineout maul is extremely creative. So, too, is a really well-placed box kick (that’s chased). However, simple passes can expose monsters and weak shoulders: watch Tommy O’Donnell’s first touch after coming on for O’Brien.

Murray ignored the narrow target and found Sexton. He hit O’Donnell, who carried to the line. Just as athletic loosehead Jefferson Poirot powered a hit, O’Donnell gently offloaded open to Stander “providing support”– a superb line. Stander got in behind to Poirot and was brought down by Yoann Maestri, though on Stander’s terms. Having moved the point of contact ever so slightly, Stander tested the French tackle in midfield and behind the gainline.

As noted on Monday, my play of the day was French fullback Maxime Médard’s offload to his openside, Yacouba Camara, “providing support”; simple but extremely creative. Both Toulouse players in front of their Toulouse coach– coincidence?

Creativity is not a dirty word and should not imply a Globetrotters’ style based on mad risk-taking or massive passes. Simple passes, which shift defenders slightly, to the right support line are very creative.

On 12:06, Ireland had a lineout just inside France’s half. Sexton found Jared Payne running a super line with seven valuable metres gained. Off the slow six-second recycle, Sexton, who had only two players (Rob and David Kearney) facing an underlap: three defenders vs two attackers. No French fixed in two plays? The Irish fullback was swallowed up with Maxime Mermoz stealing a turnover.

The first French notable attacking lineout was on 15:58, and they got their big men running. Firstly Jonathan Danty took it into midfield; then Virimi Vakatawa; but then the monster Maestri on his terms carried into an Irish back, Henshaw, with Sexton and Payne sucked in. Three for the price of one! France eventually ran out of width, but they were doing damage, moving the ball and target away from areas where Ireland were strongest.

Due to the weather, both sides fluffed scoring opportunities. But there were differences to the above plays, even with the same result. Unfortunately, when our strike move does not unlock the opposition, we struggle to create new space.

Facing such physicality in Twickenham, Ireland’s one up “go forward” carries will be battered. England are equally as physical as the French, but fitter and hungrier. How do we unlock them?