Liam Toland: Buckley showing the benefits of brain over brawn 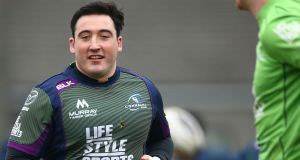 Considering the importance of our provincial derbies to the Guinness Pro12 and Europe, it’s the individual that has caught my attention.

There’s no coincidence that one of the first things Connacht’s Ultan Dillane did in Twickenham was to change feet, target a weak shoulder, power through his manufactured space, offload and remain on his feet to keep hunting. Ditto Connacht prop Finlay Bealham at the Aviva who executed a simple inside pass close to the Italian line – no white line fever there.

One individual on fire is Munster’s CJ Stander. However, as an individual, especially this weekend, he can dictate more by what he doesn’t do than what he does. Leinster’s Rhys Ruddock has acknowledged the value of Stander and no doubt the entire Leinster team will be ready for his ball-carrying. Stopping Stander is an issue of Leinster male pride. So does Stander do what he does best and carry into the waiting Leinster traffic, or does he trick them with variety?

Should Stander (and Ireland by extension) develop an offloading game to bring in hard-running support target, others wider out will capitalise. I’ll revisit this but it could see Keith Earls getting real attacking opportunities over scraps tomorrow.

But the key individual is not one of the famous five Connacht boys post-Italy; no, it’s time to talk about Denis Buckley again. He is a loosehead prop, so what of his scrum play?

Last weekend, playing into the second-half wind, there was an ever-present risk-versus-reward situation at scrum time. Obviously Connacht’s flamboyant tactics are great to watch but if you’re a Connacht prop, and certainly one under Pat Lam’s regime, you’re expected to contribute handsomely.

However, scrums can carry huge risk into the wind. Many props would discourage deep possession plays to avoid scrums and a referee’s penalty interpretation. But Buckley was central and thankfully we had referee Nigel Owens.

I’ve read back over my past articles and I’m chuffed to note the regularity Buckley is mentioned. His first mention was on November 2nd 2012 and concerned his battle with Harlequin James Johnston, who is nine-stone heavier.

On May 1st 2015, I noted “Buckley is hardly a household name and many reading this may not be aware of this guy’s existence . . . each scrum hurdle has been faced with calm and precise power; he gets the job done and he held his own against two World Cup winners within seven days of each other – All Black John Afoa in Gloucester and Munster’s Springbok BJ Botha in the Sportsground

“Beyond that, his work rate is off the charts, dwarfing his Connacht international tighthead Rodney Ah You. Much of what he does is not ‘loggable’ (support lines run, decoy lines etc) but watch him as he clears out multiple rucks in a row, hunts back into position as receiver or support runner. In essence, wherever the ball is, that’s where you’ll find Buckley energetically adding value.”

His challenge is Jack McGrath, Cian Healy, James Cronin and Dave Kilcoyne but I don’t think he is fifth in line to the throne. Along with Afoa or Botha, he managed Leinster last Saturday; starting against superb internationals Tadhg Furlong, Richardt Strauss and Cian Healy.

But as the second half wore on, the Leinster substitutions came trundling on and into that energy-sapping wind Buckley faced scrum guru Mike Ross and a fresh 124kg in Devon Toner behind the prop (that’s 251Kg) – with the frontrow completed by Jack McGrath and Seán Cronin.

The pressure of field position and scrummaging did begin to show before Buckley was brought ashore on 69 minutes. But what of his other attributes into the wind? His workrate always impresses, so too his skills and ambition around the ball – passing, not offloading, five times over Healy’s zero.

Leading to Isa Nacewa’s high hit and penalty on winger Niyi Adeolokun, Buckley threw a left-hand beauty to his fullback Tiernan O’Halloran before Adeolokun got clipped. In the first half he stole a cracker on the deck that David Pocock would be proud of; displaying his football brain in reading the evolving opposition.

But his play of the day was the most wonderful swivel pass on 66:23 minutes. Connacht had a five-man lineout just outside their 22 on the right-hand side with a one-point advantage. The uncontested Aly Muldowney (why Leinster?) fed Kieran Marmion and once again Connacht favoured possession over position.

Seven phases of controlled rewinds found Muldowney in no man’s land. He hit Buckley, who was out wide and isolated and could have been forgiven for panicking, going to ground and conceding a penalty. But a simple fixing of Leinster ‘D’ with his eyes before he circle-passed to Robbie Henshaw afforded the centre the opportunity to keep both possession and the attack going.

Remember the lineout was on the right-hand side but Buckley (and Muldowney) after seven phases were over on the left side as per Connacht’s patterns. It harked back to Rob Penny’s structure but Connacht forwards are more skilled (confident) around the ball and hence the formation looks less rigid and formulaic with a far more positive outcome.

Maybe it’s not a skill set but an ambition and understanding of what to do when out of “normal” position. Buckley’s brain over other’s brawn?