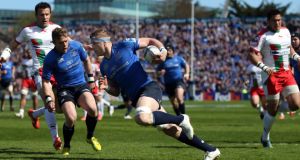 Leinster 44 Biarritz Olympique 16: A special moment: “one more year” began on the old terrace and quickly reverberated around the 18,500 full house at the RDS.

The chant seems to have been sparked by the jaded centre giving the blue ultras a sheepish wave as he gasped for air having claimed Leinster’s fifth try.

Just one more year Brian. That’s all they ask of you.

It started so smoothly, hit some choppy waters before it was sun-bathing on the main deck for the afternoon. The sea of blue milling around Ballsbridge were all smiles. A glimpse of summer, a Leinster team playing with that uber-confident strut that has them in a third European final in as many campaigns.

Friday night lights, May 17th against Stade Francais, back at the RDS. Should be some atmosphere. So many emotional goodbyes.

The injury enforced Ian Madigan experiment at inside centre worked. But it was the two men either side of him who shined. Jonathan Sexton and Brian O’Driscoll won’t be playing too many more games in blue (red and green hopefully but not blue) together so they were keen to leave a few more good memories.

Jamie Heaslip and Devin Toner also deserve praise for their outstanding performances. The number eight was like the Heaslip of 2009, slaloming around the last defender like he did against France in the Grand Slam season for this second try on the stroke of half-time. Sexton’s conversion made it 24-9 and that was that.

It had been an exhilarating opening 40 minutes. Lots of big personalities, none more than referee Wayne Barnes, all trying to stamp (some literally, Leo Cullen will have the grazes to prove it tomorrow) their mark on the occasion.

But it was Joe Schmidt’s playbook that made the first telling impact. With just four minutes gone, Toner sneaked to the back of the lineout tipping Richardt Strauss’s long fling into Isa Nacewa’s welcoming arms.

The Aucklander was away, dashing through the expertly carved hole in the Basque defensive line, but took an age to offload to Heaslip, who had slipped up the left wing unchecked.

It was a great try but they switched off for the next 10 minutes or so, Sexton even duffing a penalty well wide while Taku N’Gwenya did well to get his body underneath the Paris-bound flyhalf to deny Leinster a certain try.

That chance came off a sizzling O’Driscoll break in midfield. It should have been 17-0, instead it was 7-6, as the flawless Dimitri Yachvili punished any indiscretion.

Sexton rediscovered his kicking groove soon after to make it 10-6 before Yachvili brought it back to the minimum with a left footed strike of beauty.

Then came the avalanche.

O’Driscoll and Rob Kearney combined to send Sexton racing over and before Biarritz could find their balance again, Heaslip chinned them.

Best thing about Schmidt’s men is their ruthless streak. Like any great sporting team, they never let up (think Kilkenny in hurling, Bayern Munich in football).

It was Imanol Harinordoquy of all players who ruined any chance of a second-half revival, fumbling a routine pass, which Madigan was on to it like a shot, racing 75 metres for what, again, seemed a certain score.

The astonishing pace of N’Gwenya denied him, but the American winger killed the ball – O’Driscoll showed some of his pace remains by being first to the breakdown – and Barnes took out the yellow card as Sexton made it 27-9.

Sexton’s last contribution of the day was sublime. His combination with Nacewa on a raid down the left wing was tiki-taki type rugby and delivered Leinster’s fourth try.

He didn’t seem happy to make way for Andrew Goodman, but it seems like the right call by Schmidt, especially considering Madigan banged over the touchline conversion.

It’s hard to choose a man of the match. There were so many. Toner is making genuine strides and has earned the right to keep Quinn Roux benched. Madigan and Nacewa were so classy. Heaslip was immense, better than he has been for aeons and got the official nod.

But O’Driscoll shades it. Not just for his magic hands or crucial line breaks but his mighty defence.

Aled Brew, the huge Welsh winger, came cruising through midfield at an important moment. O’Driscoll rocked him backwards and stripped the ball from underneath his arm.

But those present today will always remember the spontaneous chanting of the people who have had the pleasure of watching this great player since he first sparked into public life as a replacement scrumhalf in a JCT match for Blackrock way back in 1994. He scored a try that day as well.