Leinster’s accuracy and discipline lets them down as Toulon pounce 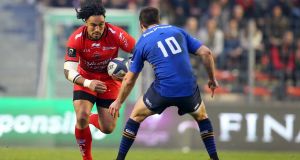 Leinster were brave and obdurate beyond dispute, but they will wonder what might have been had their performance been more accurate. Instead, they will ruefully reflect on a host of errors at key moments in the game which might have seen things pan out a little differently.

They were brave in possession as well as defence, having joy when going wide, and making six line breaks to two. There were some superb displays, not least the outstanding footwork and tackling of Luke Fitzgerald in the midfield warzone, and Josh van der Flier (who made 19 tackles), but the decline in their skill levels over the last couple of years hurt hard here, as did three yellow cards and a 17-7 penalty count.

In truth, while not exactly there for the taking, Toulon were far from unbeatable. Yes, their maul and their poaching in the tackle zone were as potent as you’d expect, but for all their straight running, Leinster kept their shape, made their tackles and kept the tryline intact save for two close-range tries off lineouts. Toulon’s lineout creaked badly without their injured Juan Martin Fernandez-Lobbe, who normally does the calls, and their defence was outflanked both off strike moves and when Leinster changed the point of attack.

But Toulon did push up hard, and though Leinster limited the number of turnovers at the breakdown in the first half, such was the delayed release of the ball and so committed in numbers were they to the ruck that it often left Sexton little option but to kick. Ultimately though, Nigel Owens pinged Leinster 10 times at the breakdown, even if Steffon Armitage clearly didn’t support his own body weight on at least one occasion.

Leinster’s defensive work was of a high quality. While Sexton still had a tendency to go in high, the outhalf, Fitzgerald and Van der Flier – along with help from the unstinting Rhys Ruddock, Jamie Heaslip and Ben Te’o – managed to relatively limit Toulon’s predictable power game via Ma’a Nonu and Mathieu Bastareaud. The muted atmosphere was a compliment to Leinster’s performance, although Sexton would untypically have a few wayward passes and kicks.

Indeed in the first minute, he miscued an attempted diagonal touch-finder, the ball rolling dead for a Toulon scrum on half-way. But Matt Stevens went straight to the dirt and was pinged by Owens.

Sexton having landed the 49-metre penalty, then went left off the deep restart through Fitzgerald and then wide right to a disorganised defence for Rob Kearney to release Fergus McFadden. When Sexton supported on the inside and Van der Flier carried off the recycle, Florian Fresia didn’t roll away.

To booing, jeering and whistling, Sexton made it 6-0 from 40 metres but soon after Toulon got Nonu and Bastareaud rumbling – Sexton taking a knock on the head after then stopping Drew Mitchell – and after a blocked chip out of defence by Fitzgerald, then had their scrum revenge when Cian Healy buckled under pressure. Toulon eschewed three probable points to go to the corner. Leinster held up the initial drive very well, but the secondary drive was an unstoppable red wave over the line for Steffon Armitage to score. Eric Escande converted.

A crooked throw by Richardt Strauss, a knock-on by Isa Nacewa when Matt Giteau marked a poor Sexton chip and kicked long, led to an Escande penalty when Mike McCarthy was pinged for offside – a home call if ever there was one. But Toulon were done likewise off a recycle after a well executed Sexton wraparound with Fitzgerald enabled Kearney to release McFadden once more.

But the pantomime crowd had their villain when slow motion replays of Healy arriving at a ruck showed his thigh connected with Guilhem Guirado’s head as the hooker stood up on the wrong side. Owens went along with Derek Bevan’s recommended yellow card.

Leinster withstood two lineouts with some superb tackling by the likes of Sexton, Fitzgerald, Heaslip and Van der Flier, with Devin Toner preventing a second maul by disrupting the take. Ruddock and Fitzgerald earned a turnover scrum with a choke tackle on Nonu and Sexton found a huge relieving touch off the seven-man scrum as Jack McGrath temporarily replaced Van der Flier.

But a poor cross-kick by Sexton and a missed take by Nacewa led to the latter holding on as Bryan Habana poached. After a Toner steal, McFadden over-ran a pass from Sexton after the trademark loop, before Sexton again kicked dead.

Leinster kept tackling well, to go in at half-time a point down, and very much in the game, but with more accuracy things could have been even better. They were quicker off the pitch too.

After a poor Toulon lineout and a couple of good Leinster scrums, Sexton missed a 45-metre penalty not long after passing poorly to Rob Kearney. Obstruction by Te’o allowed Toulon’s maul to be re-introduced, first for Toner to be binned for hauling it down. Leinster survived the first ensuing siege – Te’o stopping Guirado and Nonu – to sacrifice three points, although Strauss looked dazed as the Leinster frontrow were changed en bloc.

Without Toner to hit, Seán Cronin’s first dart went astray, and when Rob Kearney ignored a switch, he was isolated and pinged for holding on, Escande pushed Toulon seven clear, whereupon Sexton’s restart didn’t go 10. Nacewa superbly forced an attacking turnover, but after another Sexton pass went to ground Heaslip held on as Romain Taofifenua poached.

Toulon turned up the power and a scrum penalty, converted by Escande, put them two scores clear, allowing the home crowd and team to relax. After a third Leinster yellow card, incurred by Tom Denton, Armitage ploughed over from another close-range lineout with the game’s final play. The crowd could chuck their papers in the air and chant “Et ils sont la, les toulonais”. They are here, Toulon. And they ain’t going away any time soon.