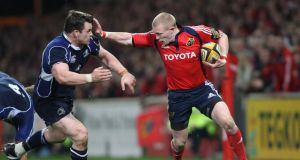 You name it: Crusaders v Chiefs, Leicester v Northampton, Bath v Gloucester or Bristol, Clermont v Toulouse, the Parisien derby, Sharks v Bulls, Waratahs v Reds, or any others that spring to mind, but Leinster v Munster is arguably the biggest derby in world rugby, certainly outside of the Test arena.

From little acorns are mighty oaks grown, and not only can it lay claim to being the biggest derby in the global game but the Leinster-Munster rivalry has been the driving force behind the rejuvenation in Irish rugby and the one constant driving force for the Celtic League/Pro12 in all its various guises.

Where would the Ireland team have been without the rivalry between the two provinces? After all, it was Munster, players, management and supporters alike, who embraced the Heineken Cup to such effect that their march on the Twickenham final in 2000 gave birth to the Red Army.

Both on and off the pitch, it’s highly doubtful that Leinster would now be one of the most successful teams in the world, as well as being one of the best supported, were it not for the envy and the desire to emulate their rivals spawned by Munster’s Heineken Cup triumphs of 2006 and 2008. Team Ireland benefited accordingly, for Leinster have replaced Munster in being bulk suppliers to a winning team.

Despite that clear warning sign coming on the back of some high octane “interpros” in the late 1990s, no one had a clue how to maximise the potential of this rivalry. The following season they didn’t even meet, and in 2003-04 and 2004-05, the frontliners were kept back from the fixture as crowds of 6,000 and 6,500 turned up at Donnybrook.

Rather narrow-mindedly, the demands of the then Irish management held complete sway, before Leinster’s move to the RDS and a New Year’s Day date ensured a 14,135 crowd witnessed a Felipe Contepomi-inspired 35-23 win. The following April they met in their first Heineken Cup semi-final, when the Red Army invaded a 47,000 capacity Lansdowne Road for Munster’s seismic win en route to their first European triumph.

But it still took organisers by surprise when over 27,000 turned up at Lansdowne Road for their Magners League match in October 2006, before the following two seasons drew 18,500 to the RDS. History may yet show that the rivalry reached its zenith with that second Heineken Cup semi-final in 2009, when a world record for a club match of 82,208 turned up at Croke Park.

Leinster won three Heineken Cups in four seasons, tagging on two league titles and a Challenge Cup success in the last two seasons. With the advantages that come with being a capital city outfit, they have maintained a superior conveyor belt of talent through their more productive schools-underage-academy system as well as a bigger support base. They have become a machine.

By contrast, although they have actually out-stripped Leinster in the last two Heineken Cups by reaching the semi-finals, Munster’s crowds have started to dwindle. There are the first signs of the Leinster-Munster fixture losing its appeal.

A guaranteed money spinner for both provinces, in addition to filling Thomond Park to its redeveloped 27,000 capacity, since the Aviva Stadium hosted the Dublin leg of the fixture the attendances have been at or close to capacity.

Not alone did last year’s upturn come later in the season, but the fixture also took place to the backdrop of Brian O’Driscoll winding down his career. Indeed, along with all the other factors – the GAA season running over and the Ryder Cup – which have contributed to rugby’s low-key start, it genuinely does feel as if there is a post-O’Driscoll hangover out there. It’s not the same without him.

And although Leinster fans would be loathe to admit it, perhaps this also serves to show that a la Celtic and Rangers, not alone does Irish rugby need a strong and vibrant Munster, but so too do Leinster.