Leinster have too much in reserve for Zebre 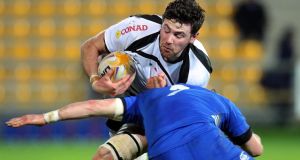 Leinster rounded off a largely positive weekend for Irish rugby in Parma yesterday where they saw off Zebre to commandeer second place in the RaboDirect Pro12.

Matt O’Connor’s men scored four tries in total, making light of their heavily excised resources and demonstrating that there is no shortage of talent coming through. In the absence of so many frontliners, it was the lesser known lights who shone brightest, most notably academy players Sam Coghlan-Murray and Tadhg Furlong, who both looked comfortable in their elevated surroundings.

Of the tries, Joe Cooney, Reid, Zane Kirchner and Darren Hudson were all on the mark, whilst Jimmy Gopperth and Ian Madigan kicked the rest of Leinster’s points between them.

For Zebre, Andries Van Schalkwyk scored the only try of the night on another disappointing outing for the Italians.

O’Connor had labelled this one as one of Leinster’s most important games of the season during the week, and even if he was perhaps laying it on a bit thick, his troops nevertheless bought into his mandate, generally applying themselves with focus and unity of purpose all the way through.

Although Leinster didn’t have it completely all their own way, it must be said, and not least during a fractious first half. Despite looking good with ball in hand early on, their defence was alarmingly porous, especially off first phase ball, and Zebre made significant gains particularly down the 10-12 channel.

Zebre outhalf Kelly Haimona was especially dangerous, and it took a last-ditch tackle by Shane Jennings to get Leinster out of trouble following the New Zealander’s first cut of the night.

Undeterred, Zebre came again, and deservedly took the lead 15 minutes in when South African Van Schalkwyk crossed over from close range following a series of drives.

From there on in, Leinster got their act together, and got their first try of the evening seven minutes later, Cooney the benefactor following a clever reverse pass by Murphy at the back of a five-metre scrum.

Gopperth converted to nudge Leinster ahead, and from there on in the visitors generally had the better of it, but didn’t quite get the results that their attacking enterprise deserved.

Solid in the lineout and dominant in the scrum, they fizzed the ball around the park with plenty of purpose and created a number of half-chances, only for the final pass to go abegging each time. Gopperth did split the posts with a penalty just before the break, but Leinster’s slender 10-5 half-time advantage was scant reward considering the amount of possession and field position they had during the first forty.

Into the second half, and Zebre continued to prove tough resistance but slowly and surely Leinster began to break them down. Reid scored a cracking try 15 minutes in, the result of some good combination play by Kirchner and the impressive Coghlan-Murray, who cut the line superbly before drawing the fullback and offloading to Reid in support.

With 20 minutes to go, Leinster then sprang Madigan from the bench and it was his vision and ambition which teed up Kirchner for try number three, the result of a multi-phase attack orchestrated brilliantly by the new outhalf. Madigan converted, leaving Leinster 15 minutes to chase the bonus point try, which they eventually got two minutes from time, when replacement Hudson stepped his way to the line after another multi-phase attack.

Madigan converted, a fitting end to a fine contribution from the out-of-favour Ireland international.