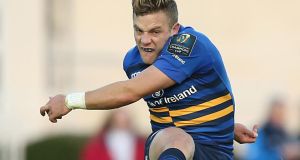 Rarely has the Irish presence at Europe’s top table been so imperilled. As the last Irish team standing in the European Champions Cup, it is up to Leinster to maintain interest in the revamped competition in these shores and, dare one suggest, provide a bit of variety in what otherwise could become an Anglo-French carve-up.

A Leinster victory would ensure progress and also a home quarter-final, and with Sean O’Brien and Cian Healy to return, the three-time champions would have the pedigree to trouble any side in Europe.

Alternatively, defeat would mean an away quarter-final or exiting the competition altogether, which would mean no Irish team in the knock-out stages for the first time since the 1997-98 season.

Rather than leave well enough alone after running up that half-century, Matt O’Connor has opted to make two changes. Kane Douglas comes back into the engine room ahead of Mike McCarthy, and the Leinster coach has sought to recharge his backrow and perhaps counter the huge physicality of Ashley Johnson, Nathan Hughes and James Haskell by recalling Dominic Ryan – a little unlucky to miss out last week – with Jack Conan reverting to the bench.

O’Connor was vindicated in his selection of Marty Moore and Tadhg Furlong ahead of Mike Ross last week, with Moore and co drawing a line in the sand with the game’s first scrum before he and Furlong went on to score tries. O’Connor also recalls Isaac Boss to the bench at the expense of Luke McGrath.

“It’s about performance,” said the Leinster coach. “It’s about team first. It’s not about scrapbooks and if you want to win things, that’s the way you have to approach it.”

Dai Young also makes only two changes to the side that beat Harlequins at the Stoop last Saturday, with James Gaskell starting in the secondrow in place of Kearnan Myall. Ben Jacobs starts in the centre alongside Elliot Daly, after Alapati Leiua injured his knee against Harlequins.

Haskell again captains the side and, having been Leinster’s destroyer-in-chief at Adams Park in the 2007 quarter-finals, will again lead their defence. That he made 28 tackles last week tells us how well he is playing but perhaps also that Harlequins might have varied their point of attack more.

Admittedly, Wasps are also a more buoyant outfit than the one beaten at the RDS in October, not least thanks to their move to the Ricoh Arena, where they have run up 40-plus tallies in two wins to date. With 22,000 tickets sold, they will dip into that emotional well once more.

There could be a pattern here, and while Wasps will assuredly have their moments, Leinster did not have to dig so deep last week. They were able to withdraw many of their frontliners long before the end.

It may take much of the 80 minutes to get there, but with the bench at their disposal today, Leinster also look better equipped to come through over 80 minutes.