League great for bringing players on, but paying for success leading clubs to the wall 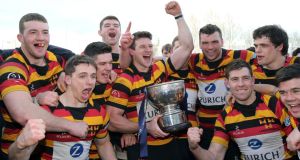 When Mike Ruddock talks about the Irish game it’s always worth listening, not only because of that engaging Welsh lilt but because, as a Grand Slam winner with Wales who has a close affinity with Irish rugby dating back to his days with Bective and Leinster in the 1990s, he has built up a considerable wealth of knowledge.

He has the added perspective of being the current Ireland under-20s and Lansdowne coach, not to mention the father of two players involved in the Leinster club and provincial system.

Ruddock is adamant his strong core of recent or current Ireland under-20s have developed all the better for playing Division 1A rugby in the Ulster Bank League, and if it comes to pass that a couple of his young backs are called up by the provinces, as was the case on Saturday when they clinched the title against Clontarf, or are bound for promotion to provincial set-ups next season, so be it.

A classic case in point was Saturday’s man of the match, Mark Roche, a product of Blackrock who is in the Connacht under-20s. Outhalf Craig Ronaldson, a product of Kilkenny College and who missed out on the Leinster academy, has just signed a one-year contract with Connacht.

A few amendments
Ruddock would like to see a few amendments to the club game, though not many, such as the addition of an extra prop on the bench to avoid the case of last Saturday when the last quarter went to uncontested scrums. As he also points out, Irish rugby is short of props. Were there a scrum guru in place in the IRFU, he would surely agree, and also recommend less restrictions on contracted or semi-contracted players playing in the AIL.

The club game can be invaluable in developing props, a position where players tend to mature later than most. An exception is Cian Healy, and later that evening, Ricky Lutton, something of a 27-year-old club journeyman from Belfast Harlequins, who Ulster have converted from loosehead to tighthead, underlined the point by acquitting himself admirably against Healy on his full provincial debut.

However, Ruddock maintains the club game is “the bedrock and foundation of the game” likening a country’s rugby structure to a pyramid. Mass participation and increasing playing numbers can only be achieved with a vibrant club game, which further enhances the chances of unearthing more quality at the top of the pyramid.

Far from reverting to a league with only amateur players, to that end, ensuring contracted, semi-contracted, development and academy players participate in the league is vital, according to Ruddock, who cited the recent example of Paul O’Connell using the AIL on his path back to the Munster team.

Ruddock concedes Lansdowne, and all Leinster clubs, benefit from a particularly strong schools game in the province and it is this, along with a myriad of other factors, which has seen a shift in the balance of power from Munster to Leinster in recent years.

This has been reflected at club as well as underage level, with Lansdowne’s success following the titles of Old Belvedere and St Mary’s (for whom Ciarán Ruddock played, so bragging rights shifted back to his dad over breakfast on Sunday morning). Previously, Limerick clubs won 13 of the first 20 AIL titles, with Munster clubs accounting for 17 of them.

Player pool more shallow
There are four Limerick clubs in the 10-team Division 1A, which makes it even harder for all four, and their pool of players has become more shallow in the current economic climate. Many young players, on finishing their degrees, are either migrating to Dublin or emigrating, and this is applying in Cork as well, as the Clontarf line-up on Saturday again testified to.

Young Munster, according to their coach Mike Prendergast, lost eight of last season’s first-team squad that finished as the leading Munster club in third place, six of them to emigration or migration. And the league campaign is, of course, as much a test of strength in depth as of the first-choice starting XV. Lansdowne have used 42 players in their 16 games to date.

Viewed in this light therefore, it’s perhaps no surprise Munster clubs have voted unanimously in favour of a proposal to stop all payments to players at club level. Heaven knows how much money has been bled out of the clubs in payments to players since the league’s inception in 1990. Several are known to be €1 million, or even €2 million, in debt and it is reckoned within the IRFU the cumulative debt of the clubs to banks is now conservatively estimated at €25 million.

A huge chunk of this has lined the pockets of the players, and this can be seen in how little of that €25 million has been spent on facilities. Alas, there has not been unanimous support for the proposal to stop paying players within Leinster, in part because they say it cannot be policed.

However, the current IRFU president Billy Glynn has been using his term in office and visits to all the clubs to promote the belief that this proposal can be policed, through strong regulation and a whistle -blower’s charter, along with punishments to any club found to have paid players, be it points deductions and even demotion.