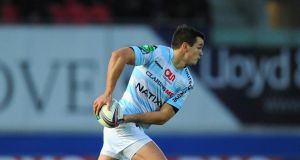 The only bruise came to Sexton’s pride after he was timed out in attempting an early penalty for the Sky and White, taking longer than the permitted 90 seconds.

Morgan Parra then gave Clermont the lead with a penalty in the 22nd minute with Sexton equalling up affairs six minutes later. The score remained at 3-3 until the break, with the Top 14’s top two defences ensuring space was at a premium .

Parra and Sexton traded penalties in the first 10 minutes of the second half before Racing made the breakthrough on 56 minutes when left wing Marc Andreu got over for the game’s first try, with Sexton’s conversion making it 13-6.

Johan Goosen replaced Sexton on 66 minutes, with Clermont drawing level six minutes later when winger Noa Nakaitaci, who came on for Zac Guilford for the final 20 minutes, got over. With Parra having been replaced it was left to Brock James to convert.

The Australian No 10 had the chance to win the game and leave Sexton to rue his earlier timed-out kick, but James’s 79th-minute effort drifted well right and wide as Romain Poite blew the final whistle.

The two points moves Clermont a point clear of Toulon at the top of the table after the two-time European champions went down 28-23 away to Bordeaux Begles. Third-placed Stade Francais also lost, going down 23-6 away to Bayonne.

Racing are in fourth position, four points adrift of their Paris rivals and two points clear of Toulouse, who just got home 23-20 against lowly Lyon.

Connacht make seven changes as they seek to extend winning run 06:00
Carbery’s return the major subplot as Munster visit Arms Park 06:00
Ireland will be looking for that clinical edge in Rome, says Farrell 06:00
Jacob Stockdale to be unleashed as Ulster target win over Ospreys 06:00
Six Nations miscellany: Jonathan Davies can provide the glue for Wales 06:00
Crossword Get access to over 6,000 interactive crosswords