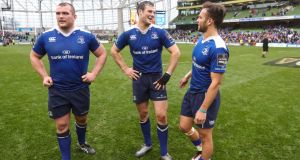 Leinster’s Jack McGrath with Robbie Henshaw and Jamison Gibson-Park after their win against Munster in the Pro12. Photo: Inpho

Jack McGrath was the first professional rugby player in Ireland to allow his name, face and story to be used in the Tackle Your Feelings campaign.

Last night McGrath continued his association with raising awareness about mental health at a panel discussion in Lansdowne rugby club.

“The whole campaign is to encourage people to open up about your feelings,” said the 27-year-old. “You don’t know how many people will listen to you, that’s what I thought was pretty amazing.

“Doing the video has opened me up, not just in the public but my own family, my own relationships. If I am a bit more annoyed at anything I am more likely to say it now, to get it off my chest.

“It has helped a lot of people but it has helped me so much as well. I changed as a person from doing it, for the better.”

McGrath also spoke about hugely positive feelings in Leinster these past few weeks generated by the sight of Cian Healy returning to something similar to the form that had him branded the best loosehead prop in the world a few seasons back.

“Andrew is training with us the whole time. He is very similar to Cian in attributes. He was massively impressive in the [Under-20s] World Cup. But, for me, if I concentrate too much on them I lose a bit of sharpness myself. I’ll always say Cian and Andrew are different players to me. They have their strengths, I have mine and I will try and play to my strengths.

“Cian’s Cian, a quality player, it is great to have him back. I think we are a good team together.”

McGrath still wants to play 80 minutes. He has proven himself capable of doing this for Ireland but there is no need, certainly not against Castres on Saturday.

“There are different roles happening in the club now; a bit more leadership from certain players which is nice . . . there is only so much the coaches can say before you stop listening. .”

It’s non-stop now: Castres, Montpellier, Connacht, New Zealand, Canada, New Zealand and then Australia before November ends. McGrath could be on the field for every game.

Not that he would mind.

So to even mention the Lions tour in June would be unnecessary.

“I was watching something on RTÉ there the other night – think it was Shane Lowry that said, if you try and get into the zone too much you won’t get into it. If I am trying too hard to get onto a Lions tour I won’t get onto it.

He seems genuinely happy to be facing a gargantuan French pack.

“It’s going to be brutal, yeah. They are a tough, tough pack. We’ve been looking at them all week. They are huge men that just want to dominate you.

“We want to be going toe to toe with them. See where we are at.

“We want to be up to where we were in Europe a few years ago. It’s exciting but there is a little bit of fear as well.”