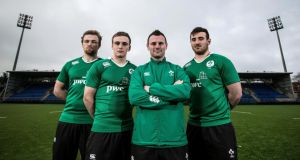 The Irish Under 20 team will play in Dublin for the first time since 2005 as an extended squad of 30 players was named ahead of the Six Nations campaign.

The home game against England Under 20s is scheduled for Donnybrook on Friday 28th February.

Ireland also play against France at home in Dubarry Park, Athlone on Friday, 13th February. The first match of the championship is against Italy in Stadio Pozzi Lamarmora

“The squad sees a great mixture of new faces and those with experience at this level from last season. We have been really impressed by the attitude of the players, both on and off the field,” said coach Nigel Carolan.

“The warm up games against the provincial development sides over Christmas have provided the opportunity to develop our game and confirm the potential within our player group.”