Ireland hope whole will be greater than England’s parts 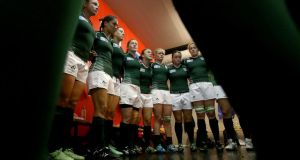 If you don’t believe in the prowess of Fiona Coghlan’s band of sisters by now, you never will. Ireland can win this evening, they really can, but they need all the variables to fall in their favour.

The 17-10 defeat at Twickenham last February can be explained away by the premature loss of Jenny Murphy, Sophie Spence and in particular the massive right boot of Niamh Briggs before the hour mark.

Factor in the unnecessary sin-binning of Lynne Cantwell and Heather O’Brien, as well as the early push-over try, when an English voice tricked the Irish backrow into disengaging, and there are excuses aplenty.

But even if none of the above transpired, England were the more powerful outfit and deserving victors.

“We learned a huge amount from Twickenham for all the wrong reasons,” said Ireland coach Philip Doyle. “But we showed against America, New Zealand and Kazakhstan that we now have the ability to adapt.”

The concern is that in every area of Irish strength, England appear to have an individual edge.

Emily Scarratt is a wonderful centre who gets more distance than Briggs’s kicking and provides a greater attacking threat than Lynne Cantwell, who incidentally captained Richmond to the English Premier league title last season.

In Maggie “The Machine” Alphonsi MBE, they have an openside that will seek to break the iron resolve of Claire Molloy.

But don’t despair. The same arguments were offered before New Zealand took the field last Tuesday. That 17-14 victory needed to be seen to be believed. As will this (a 20,000 sell-out is expected).

Anyway, here’s how victory is possible.

Variable one: an airtight defensive effort is absolutely essential.

“Even when we lost all those players in February, the other girls refused to crumble,” said Doyle. “And they threw everything at us.”

Variable two: Doyle’s coaching ticket needs to outwit that of his old nemesis Gary Street. Ireland have an ace in the hole here. Joe Schmidt arrives in Paris this morning.

Yet again, from the shadows, one of the great minds in world rugby has been assisting Ireland’s cause.

If Joe can’t figure them out no one can.

Ideally, the charge of England’s bench will have a similar result to their Light Brigade under Lord Cardigan at the Battle of Balaclava during the Crimean War. That ended in retreat and near ruin.

Ireland’s major impact subs will be centre Jenny Murphy, her brutality on arrival against America and the Black Ferns was a joy to behold; and Siobhán Fleming, arriving into what promises to be a monumental backrow tussle.

Also, Saracens winger Hannah Casey’s entry into the fray against the land of her birth – she’s of Valentia Island extraction – should guarantee a few more wincing collisions.

England have made six changes from the disappointing draw with Canada, which actually proved beneficial as it took New Zealand out of the equation. The Canadians got under their skin though. So can Ireland.

Murphy’s arrival in the second half will be seen and raised by England flanker Marlie Packer. Surprisingly, Heather Fisher doesn’t make the match day squad.

“We have five world-class backrows,” said Street. “We can’t fit them all in.

“Maggie Alphonsi has made 51 tackles in two world cup games, which is an incredible amount. She made 29 tackles against Canada but she is ready to go again.

“We are probably the most explosive side in the world,” Street added.

“It’s no secret that every game is about winning the collisions.”

The half backs have also changed, with La Toya Mason at scrumhalf and captain Katy McLean returning, despite damaging her left knee against Samoa.

This ongoing concern has been quietly addressed by the IRB flying over Alain Rolland this week to put the officials through their paces.

The problem has been the IRB’s stubborn refusal, despite a growing chorus of coaches and players, to accept that the best female referees cannot improve if they are assisted by inexperienced touch judges.

“I think Amy Perrett is the number one referee in the world,” said Doyle.

“I think the head of referees has learned a lot since the competition began. There were issues with the lines – people getting information in. We all saw that in the Kiwi game when there should have been a penalty try.”

Briggs versus Scarratt off the kicking tee is another pivotal duel.

“I remember leaving Twickenham in February knowing we were a better side than we showed,” Doyle continued. “We’ll show England that tomorrow night.

“They think they might have us for pace out wide. But they won’t. They will definitely come after us up front, try and suffocate us, but we are putting plans in place to counteract that. They will have a cut off us at the breakdown and come after our maul big time.

“I have been very impressed with their defensive lineout as well, so we are going to have to be very light on our feet, very quick and identify space in the air.”

So, yet another level of intensity and performance is required, but if you don’t believe in Fiona Coghlan’s band of sisters by now . . .