Welsh duo back in harness with Lions 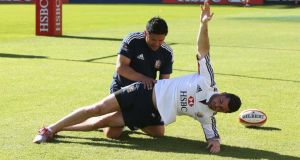 British and Irish Lions captain Sam Warburton will return to full training tomorrow while Welsh prop Gethin Jenkins took part in all of today’s session in a major boost for the tourist’s test ambitions.

Warburton missed the opening 59-8 win over the Barbarians in Hong Kong on Saturday because of a knee problem and has completed limited solo training in Perth with his leg heavily strapped. Jenkins was also absent in Hong Kong because of a long standing calf issue but both will be in contention to play against the Queensland Reds in Brisbane on Saturday.

“Gethin trained fully and Sam will train fully tomorrow (Wednesday), he didn’t quite do everything today but he will be fine for tomorrow,” Lions assistant coach Graham Rowntree told reporters today. The duo will both sit out tomorrow’s opening match on Australia soil against the Western Force at Subiaco Oval. Warburton, Jenkins and Rob Kearney, who has a grade one hamstring tear, are the only members of the 37-man squad who will not see action in the first two matches of the tour.

The Lions have been relatively fortunate with injuries in comparison to the Wallabies, who had lock Sitaleki Timani join David Pocock in being ruled out of the series on Monday, with Digby Ioane, Tatafu Polota-Nau and George Smith other injury doubts.

The Lions have only four games left after the clash at the Subiaco Oval before the first test against the Wallabies on June 22nd in Brisbane, leaving Jenkins and Warburton with precious little time to find form. “We have said to the guys that everyone will get a start in the first three games,” Rowntree said when asked if he was concerned time was running out.

“After the Reds game on Saturday, we will have to start making a few decisions on combinations. There’s everything there to play for, for everyone.”

The Force have named a weakened side to play the Lions with an important Super Rugby fixture on Sunday leading to fears the inexperienced line-up will provide little opposition for the tourists, who steamrolled a ragged Barbarians side. Rowntree dismissed concerns about the supposed poor quality of opposition, with his focus centred on his own players and trying to drill home a host of new calls and gelling his pack.

“We’re very respectful of the opposition but we’re wary of getting our detail right and our structures up and running because this is another starting 15 for us,” the former England prop said. “There are new combinations and we need to get our systems and calling in place.

“It’s not easy because for instance to get an understanding between throwers and catchers at the lineout takes time. I think we have a great group of players and with all due respect to previous players this group is exceptional. It’s time we delivered.”

Walk tall, golfers, and tell Leo that golf is not the enemy at the gate 06:35
Mick’s millennium: McCarthy clocks up his 1,000th game as manager 06:00
The interpros give players a chance to prove the coaches wrong 07:09
Pro14: Munster-Connacht rivalry set to take on a sharper edge 06:00
Indoor Championships draws record number of athletes despite pandemic 06:00
Crossword Get access to over 6,000 interactive crosswords