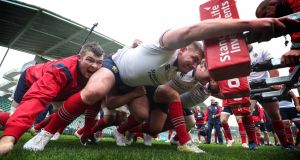 It was only a year and a week ago, in Ireland’s second Test against South Africa in the Highveld of Johannesburg, that Tadhg Furlong was elevated to the rarefied air of a Test starter.

Such has been his progress since that no one batted an eyelid when he was named to start the Lions’ first Test against the All Blacks.

The time invested in him by Leinster through their Youths set-up and then Ireland, where he had been a regular squad member since before the World Cup, has reaped a rich dividend. This season he has become the heir to the number three throne occupied by John Hayes and Mike Ross for fully 16 seasons, and all the indications are that he can have a similarly long and productive career.

“Tadhg is getting better and better,” said Warren Gatland yesterday. “He’s still pretty green but he’s got something about him – he’s explosive, he’s quick for a big man, surprisingly quick. He’s a good ball carrier and he had a nice bit of inside play with Johnny [Sexton] and then an offload,” added Gatland in reference to one of the three occasions Furlong linked with Sexton in the opening 25 minutes against the Maori.

“That’s what we’re encouraging players to do and he’s the modern prop, for me. You’ve got to have more than just set-piece, scrum and lineout. You’ve got to be able to get around the pitch and defend, so I think in the next few years he’s definitely going to be one of the world’s best in that position. He’s just getting better and better and I think he’ll come away from this tour having established himself as being one of the top props in world rugby.”

High praise, though Furlong would probably laugh it off sheepishly. Even at the start of the season, the thought of touring New Zealand hadn’t even entered his mind.

“It’s kind of weird, the journey you take, when you get your first international start and you’re exposed to the big world that it is and the pressures that come with it. As you get used to it a little bit and spend time in that environment of high-pressure games, you can probably start relaxing and let your game play a little more.”

“I probably came out of that South Africa tour with a lot of confidence. I thought I went reasonably well in my first Test start against a good scrum. In November, then, when you start to pile minutes on minutes, it probably gives you that bit of confidence that you can start pushing towards or aim for something.”

“But I think the real moment of focus for me this year was when Stuart Lancaster came into Leinster. He had worked with a lot of players in different environments – and a lot of players who are here on tour – and he basically had a one-on-one, where we sat down and he said: ‘From what I’ve seen, you can really push on and try to aim to be a Lion this year’.

“At first, I was ‘Jeez man, what are you saying, like?’ You probably didn’t see yourself in that picture but he probably backed you and I suppose gave you a focus and goal to drive towards.”

He remains quintessentially himself and a proud product of Wexford farming stock. Having gone to Good Counsel in New Ross he emulated his father, James, by playing as a prop with New Ross RFC, while his mum, Margaret, is a principal at Ballycullane National School.

This was for his family and friends as much as himself.

“Their support has been great. You always think of the club back home where you started, your family who carted you here, there and everywhere. There’s everyone else who has helped you along the way – Clontarf, Leinster, Ireland, etc. It’s a very proud day for me and all those people.”

The time difference had limited dialogue with home.

“My dad has still actually not got a mobile phone, which I think he’s pretty happy about,” Furlong revealed chirpily. “My parents are coming over next week so I think Mam has got her head around roaming at the minute, and hopefully I’ll be able to contact her, all going well.”

His second Test start was the win over the All Blacks, the next being the rematch at the Aviva Stadium two weeks later, albeit this task is an altogether bigger task, not least at scrum time.

“It’s definitely right up there. I think their strength is, massively, their collective. You can see on opposition scrum ball the cohesion they have as a pack, their timing on ball entry to get a really strong snap, from a coaching point of view and technical point of view, is perfect. So for us looking at that, technically, physically and emotionally we’re going to have to be right at the top of our game to match it.”

And in every other respect too.

“It probably doesn’t get any bigger than the All Blacks in Eden Park, to be fair. We’ve prepped well as a team and we have a session this afternoon as well to keep going at things and perfect little things we want to perfect, so I’m looking forward to what is a huge challenge. But these are the sort of days that you play rugby for.”