Cheika puts hopes in Pocock and Folau, but Argentina are not planning to sit back 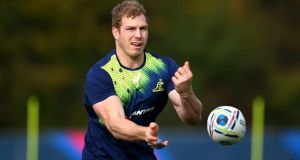 David Pocock of Australia passes the ball during a training session at The Lensbury Hotel in London. Photograph: Dan Mullan/Getty Images

The state David Pocock and Israel Folau show up in may dictate this result. Their loss, along with Scott Sio’s busted-up elbow, would equate to Ireland’s crippling injury woes.

Agustín Creevy, the Argentina captain, was also passed fit and Marcelo Bosch returns from suspension at outside centre instead of Matías Moroni.

Folau has barely fired a shot at this tournament due to an ankle problem, with Kurtley Beale proving a thrilling and reliable replacement at fullback. But the Rugby League, via Aussie Rules, convert was the most athletic rugby specimen on the planet until hobbling off against England on October 3rd.

You could hear Grant Nesbitt, the Mícheál Ó Muircheartaigh of Kiwi commentators, purring as Folau thundered into and slid around All Black grips during the Rugby Championship encounters in the summer. But that phenomenally elusive style and the 26-year-old’s freakish leaps have been notable for their scarcity of late.

Cheika also rolls the dice with the injury-cursed Pocock, who has apparently shaken off a calf problem to wear the eight jersey. Of course he will play openside wing forward along with Michael Hooper.

To win a World Cup without a dominant number eight would be a unique achievement that remains unlikely.

Ireland attempted to play two small flankers in a bid to dominate the breakdown against Argentina’s bullish backrow of Pablo Matera, Leonardo Senatore and the wonderful Juan Martín Fernández Lobbe. The plan did not work.

Now Pocock and Hooper are far better than Chris Henry and Jordi Murphy. When Pocock gets over the ball, as England found to their tournament-ending detriment, he will not be budged.

There was a strong argument that night to suggest he’s the world’s best player. He just needs to stay fit long enough to prove it. Argentina have a real chance of reaching their first-ever final if they can nullify him and even expose Folau’s dodgy ankle.

They have a solid chance regardless. The victory over Ireland was so expressively brilliant that it cannot be a mirage created by the loss of every single world class player at Joe Schmidt’s disposal.

In the same breath, there is little chance of Los Pumas being allowed flood the outside centre channel policed by Tevita Kuridrani and veteran wingers Adam Ashley-Cooper and Drew Mitchell.

But they will breach the green and gold line at some stage – 26 tries in five games promises us that much.

“They beat us this time last year,” Hooper noted. “It was a good, dominant performance in Mendoza. They have been a good team the last couple of years. We have been playing them a lot in the RC and each time it has been a closer encounter, bar one or two. It’s going to be an 80-minute full-on match.”

A full-on match that Argentina can and should win. The Wallabies’ progress needs some context. They profited from England’s defensive confusion and Wales’s offensive ineptitude. Scotland should have beaten them. Granted, Pocock and Folau were missing, but how fit are they now?

Also, the Scots really exposed their attack, snatching two intercepts for counter-attacking tries, by constantly and rapidly pushing up on their three quarters.

Argentina won’t sit back – they can’t sit back. Not unless they own the ball, build a lead and the expected rainfall comes. In that case, Juan Martín Hernandez and Nicolas Sanchez can put on a controlled kicking spectacle that should set up the ultimate underdog final next weekend, probably against opponents they already frightened at this tournament. Verdict: Argentina.