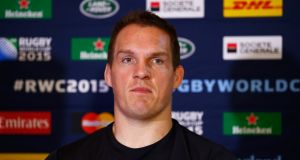 Wales head coach Warren Gatland has made three changes of personnel to his team for Saturday’s Rugby World Cup quarter-final against South Africa at Twickenham.

Positional moves see George North revert to the wing after he started at centre against Australia in last weekend’s Pool A decider, with Warburton switching from blindside to openside flanker.

Wing Liam Williams, who suffered a foot injury during the Australia match, and flanker Justin Tipuric are other absentees from the starting line-up on duty five days ago.

Williams is now out of the tournament while Tipuric features on the bench, where he will provide back-row cover.

Morgan, 20, was called into the Wales squad last month as replacement for an injured Cory Allen.

Morgan made his Test debut in a tournament warm-up game against Ireland in August but failed to make Gatland’s original 31-man group. After taking over from Allen, he started when Wales beat World Cup opponents Fiji and Saturday’s encounter will see him win a third cap.

The vastly-experienced Jenkins, meanwhile, returns to gain cap number 119 of his Test career, and Lydiate’s renowned tackling work is sure to be required in abundance, given South Africa’s trademark physicality.

Lock Alun-Wyn Jones will make a 100th Test match appearance — 94 for Wales and six in British and Irish Lions colours — as Wales look to secure a semi-final spot for the second successive World Cup campaign.

Gatland said: “After coming through an incredibly tough pool, we are excited to be in the quarter-finals and returning to Twickenham.

“The physicality and intensity of the matches so far will stand us in good stead for what is going to be a huge battle against the Springboks.

“They have grown game on game in this tournament and we know the challenge that faces us from a talented South African side.”

Wales lost 16 games in a row to South Africa between 2000 and 2014, but the latter defeat was a 31-10 loss in Nelspruit after the Springboks were awarded a late penalty try.

Wales then avenged that result by beating the Springboks 12-6 in Cardiff when the countries last clashed 11 months ago.

The one previous World Cup meeting came in Wellington, New Zealand four years ago, a group match that saw Wales edged out 17-16.