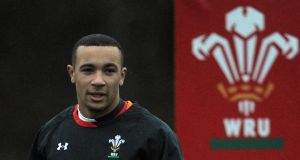 Ospreys wing Eli Walker has been called into Wales’ World Cup squad as a replacement for the injured Liam Williams, the Welsh Rugby Union has announced. Photograph: Tim Ireland/PA

Wales have called Ospreys wing Eli Walker into their World Cup squad as a replacement for the injured Liam Williams, the Welsh Rugby Union has announced.

Scarlets back Williams suffered a foot injury during Wales’ 15-6 defeat against Australia in last Saturday’s Pool A decider at Twickenham.

Walker will link up with the squad immediately at their Surrey base ahead of this weekend’s quarter-final appointment with two-time world champions South Africa.

statement from the WRU on Tuesday morning confirmed: “Ospreys wing Eli Walker has been called into Wales’ Rugby World Cup squad and will link up with the squad immediately.

“The 23-year-old was originally named in the 31-man RWC squad but was released due to injury ahead of the tournament.

“Walker replaces Liam Williams, who was released on Sunday.”

Williams, who was concussed during the 28-25 victory over England a fortnight ago, returned to action for the Wallabies clash only to limp off nursing a foot problem as Wales’ injury count continued to pile up.

The 24-year-old became the sixth member of the squad that started the tournament to be ruled out by injury, following Leigh Halfpenny, Rhys Webb, Scott Williams, Hallam Amos and Cory Allen.

But Wales nevertheless emerged from the tournament’s so-called ‘pool of death’ in second place behind Australia, and they will face the Springboks in Saturday’s opening last-eight encounter.

”We are very sorry for Liam. He has been outstanding in the last couple of years,” Wales assistant coach and skills specialist Neil Jenkins said on Sunday.

”He’s a huge player for us, and he did well again (on Saturday). He will be a huge loss, but we have had quite a few injuries now and we have to get on with it.

”The amount of players we have lost isn’t ideal. We are a pretty small nation anyway, but we still had a pretty potent back line out there on Saturday and I am sure it will be the same again next weekend.

”We have had incredible bad luck, there is no doubt about that.”