These US Eagles have their talons sharpened for Ireland 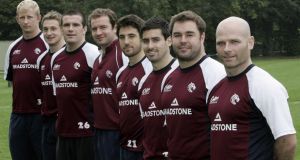 Gavin Hickie (second from right) poses with the Irish contingent during his time at Leicester. He is is now working in the US with their under-20 side. Photograph: Getty 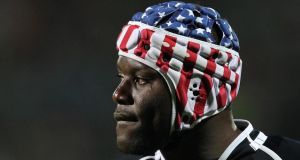 USA Eagles Taku Ngwenya who will play for the Barbarians against the Lions today before lining out for his national team against Ireland next Saturday. Photograph: Billy Stickland/Inpho

True story. An Irishman landed in Milwaukee over 30 years ago. A decent club player with Lansdowne, he wasn’t long seeking out what the locals called “a skirmish”.

He also wasn’t long being decapitated. On screwing his head back on he decided the time had come to work on his handicap.

Rugby in the States has evolved since, but the common denominator of contact sports in North America remains intact; the paying customer likes audible pain, they want collisions.

Tune into TG4 at 1.30am next Sunday morning and see the aptly named Todd Clever and Manu Samoa go about delivering this for the 22,000 capacity crowd at the BBVA Compass stadium in Houston, Texas.

“A few years ago I got off the plane from Leicester on a Wednesday and next day at training I got hit harder than I had ever been hit before.”

That’s an astonishing thing for Gavin Hickie to say. The former St Mary’s College and Leinster hooker arrived for a season of amateur rugby at Belmont Shore in California having been eased out of the professional game after mangling his shoulder trying to tackle Jason Robinson in 2007. Of all the places, he arrived from Welford Road where hard hitting and training ground fights are still a way of life.

“The game is extremely physical over here and it will be like that next week in Houston.”

Hickie is currently preparing the USA under-20 forwards for the Junior World Cup and doubles up as interim head coach for the sevens and 15 aside at Dartmouth College. He also runs a website, lineoutcoach.com.

“I would say the USA will win this one.”

Really, Gavin? Maybe the past five years coaching in the land of hope and glory clouded his mind. Maybe he has gone all patriotic on us?

Actually, he views it with logic.

“You take so many leaders out of the Ireland team due to the Lions. I know the young guys have a lot to prove and it is a great chance for them but they are coming up against a very hard hitting team.

“Mike Tolkin (the Eagles head coach) has put in some good structures, rugby is growing over here and for this match it feels like there is a lot at stake for American rugby.

“I know there is a lot at stake for Les Kiss and the new coaching structure but I feel the USA might just get this one right.”

So, this handy two-match tour of North America could get really serious really quickly. At least Les Kiss had his young squad, with 23-year-old captain Peter O’Mahony, boarding the plane to Houston this morning forewarned.

“I would imagine they would be fairly confident that they could cause some type of upset,” said Kiss. “If we allow that to exist in any way once we step off the plane, where they feel they can take it to us, then we will have a tough day at the office.”

Not to be a scaremonger but Canada are some distance further down the tracks in terms of player development than the US.

“That’s a fair comment,” said Hickie, a cousin of former international winger Denis. “But I feel the fact that USA have that Canada game behind them (they lost 16-9 with both sides shorn of their European based professionals) and then there is the heat. And humidity. That will be devastating, energy sapping. You just can’t catch your breath.”

The 8pm kick off will help as conditions should drop to 25 degrees with the humidity up around 85 per cent.

‘Good athletes’
Hickie’s assertion that America can beat Ireland next Saturday is also put to Tony Smeeth. Last year Trinity College’s director of rugby was seconded by Tolkin to work as backs and attack coach.

“Americans being Americans, they always think they got a chance,” said Smeeth. “But if we ever did have a chance this would be it. We are reasonably well prepared – in camp three weeks. The big issue here is getting our domestic players up to speed. They are all good athletes but it is like Brian O’Driscoll trying to maintain his high standards playing J1 rugby.

“The boys coming in will lift it significantly. Scott LaValla and Todd Clever are leaders.”

Samu Manoa and Taku Ngwenya will also be battled hardened from facing the Lions in Hong Kong today.

“They were reasonably competitive against Ireland at the World Cup but that’s because of the rain,” said Smeeth. “I watched it again this week and Ireland had 90 per cent of possession, America put in a huge defensive performance and Paul Emerick took his chance to get the try but Ireland dominated. They just couldn’t score.”

Kiss has adopted a respectful, cautious approach: “This will not come easy. This will be a tough Test. It took us a long time to put them away the last time. They are a proud rugby nation. The new coaching staff of Mike Tolkin is getting around and seeing players. I don’t want to be five minutes into the game and get a wake-up call.”