Strong ‘second string’ Ireland have their chance to impress 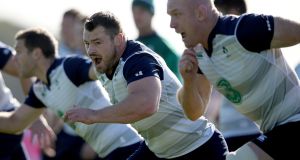 It’s Wembley. The forecast is set fair. The attendance is set to nudge the World Cup record of 89,019 set at the same venue last Sunday for the New Zealand-Argentina clash. Given it will again be akin to an Aviva home match but on a grander scale, this ought to put a spring in the step of Ireland’s oldest World Cup team.

If a handsome win comes to pass, it will also mean all bar one of the 31-man squad will have made a positive contribution in the opening two games.

The one exception, a trifle worryingly, is Robbie Henshaw, whose twanged hamstring has not been risked despite repeated assurances that all 31 players would be fit for selection. He will be given until next Friday to prove his complete fitness for the Italian job.

As expected, only the indefatigable and durable Jamie Heaslip, Keith Earls and a little more surprisingly, Jared Payne, have been retained in the Irish starting line-up from their eight-day turnaround, while Ian Madigan has been preferred to Paddy Jackson at outhalf amid the possibility Madigan might also do some of the endgame at scrum-half.

The Irish camp believe the Romanians are much more competitive than Canada, not least in the way they contested the French lineout and scrum, and at the breakdown.

Nor is it the strongest Irish selection, which will make it that bit more difficult for a host of individuals whose World Cup could be defined by this game, with the likes of Devin Toner, Jordi Murphy, Tommy Bowe and Simon Zebo springing to mind, while for others they’ll have a gut feeling that this might be the only time they play in this World Cup. It’s still a damned good ‘second team’.

Against that Lynn Howells has picked seven of the starting team that fell 38-11 to the French on Wednesday. Judging by Japan’s capitulation against South Africa, if less so Fiji’s strong second-half against Australia, that’s a tough ask.

Achieving a solid base off scrums, lineouts and at the breakdown to work off (Ireland’s clearing out against Canada with just two or three men was a marked improvement on the warm-ups) is the aim. And a win, said coach Joe Schmidt, “with a little bit of breathing space, that’s a good day for me, because I don’t feel quite so much pressure in the coaching box if there’s a bit of distance in the scoreboard, but I know that’s not going to come easy”.

“A good day at the office is if we can bank four points, I think what Cheiks (Michael Cheika) said earlier in the week; if you’re going through trying to win each game and that’s your objective, if you manage that you qualify. So, for us, it’s making sure we get those parts of the game right and ideally then building the pressure that allows us the scoreboard separation and, if we can get that . . . , but if we can be beyond a score or two at least we can breathe a bit easier in the last 10 or 15 minutes.”

Much to Schmidt’s chagrin, Ireland also fell foul of Craig Joubert, tomorrow’s referee, when Ireland lost at home to Wales in the warm-ups and conceded 14 penalties. Asked if Ireland would learn from that game, Schmidt said: “I hope it’s mutual really, to be honest.”

Noting, with irony, that had the officials made use of the TMO for the penalty against Paul O’Connell for a neck-high clear-out, the Irish captain would not have been penalised, the Irish coach added: “At scrum time, the following match, when Wales played Italy and we played England there was a massive contrast and they refereed very differently.”

Describing Joubert as “a world-class referee”, Schmidt said: “He’d have seen what Romania are doing at scrum time because he was an assistant on Wednesday evening, he’s a referee that does very good, thorough preparation coming into the match and I’ve no doubt he’ll give us an indication of what he expects of us and he’ll do the same for the Romanians.”

Ireland will also hope for a better return from their kick-chase game than was the case against Canada. Along with the possibility that Romania may wilt in the final quarter, that gives this revamped Irish team all the incentive to again play with a high tempo, and the kind of depth and width they employed against Canada, with less of the dropped ball.

The use of decoy runners was excellent, as they also offered carrying possibilities, and while Romania varied when to push up or drift against the lateral French, who hardly employed a decoy runner, they did defend narrowly at times. With similar use of decoys to check the drift, there should be space around the edges for this Irish attack.

The Romanians also often kicked long to the French back three, which should therefore offer scope for the Bowe-Zebo-Keith Earls axis to counter. All in all, Bowe ought to have more opportunity to remind all and sundry of his many qualities.

In any event, while Ireland may well have to patient, a bonus point win ought to be within the remit of this evergreen XV.