Springboks demolish USA and secure top spot in Pool B 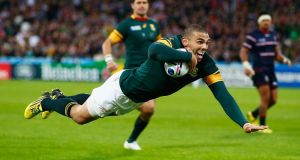 No one expected the Brave Blossom heroics of several weeks ago. Lightning striking twice in Pool B with South Africa on the cusp of sealing qualification into the quarterfinals, seemed even more remote as the USA made 12 changes for last night’s game in Stratford.

For that they paid a heavy price with the first whitewash of the tournament and the first time the USA have not scored a try against South Africa. Only Uruguay has so far had more points scored against them in their 65-3 defeat to Australia.

South Africa will meet the winner of Wales and Australia at the weekend in the quarterfinals.

What became a demolition of the USA also a tilt at history from the majestic Bryan Habana, the winger, who came into the game with 61 tries from 113 tests and was South Africa’s most experienced player.

Habana was lucky in the end to continue the match after a nasty high ball clash with USA fullback Blaine Scully, had them both off the pitch on 21 minutes for head injury assessment.

But on his return the right wing electrified the game in the second half with three tries within a 20 minute spell, which brought his World Cup total to 15 tries. His third drew him level with New Zealand’s Jonah Lomu’s World Cup record.

Most teams, although not Ireland, have had to contend with one tight turn around. The USA arrived to the Olympic Stadium four days after South Africa had beaten Scotland and they must now face Japan on Sunday in what they have termed as one of their target matches.

In that light there was a high degree of inevitability about the outcome and that the Bok’s would hit the accelerator. As the first half unfolded, they appeared to have hit it too hard too fast.

Although South Africa entered the break with two converted tries and the remnants of a crushed US scrum in their hands, they would have faced a frustrated coach Heyneke Meyer.

South Africa had all the territory, won the set pieces, dominated the breakdown and had the lion’s share of possession but too often they rushed the final play. Schalk Burger, Eben Etzebeth and Duane Vermeulen were immense in the pack, knocking the Eagles back on the gain line at almost every opportunity.

But Francois Louw was pinged for going in off his feet, and Vermeulen knocked on towards the end of the first 40 minutes to stop South Africa dead in their tracks. Just those two incidents were a microcosm of the more haste less speed flaw of their first half.

They put that to rights quickly and within eight minutes of the restart Habana and Hooker Bismarck Du Plessis put Bok nerves at rest. Seconds in Habana anticipated a clever kick through a flat US line from captain and scrumhalf Fourie du Preez.

He scampered onto it before delivering with his traditional dive. It was Habana’s 13th in World Cup competition, which left him just two tries shy of Lomu.

But the lightening winger had not finished his body of work for the night as the Boks took complete ownership of the second half. It was as things have gone in mismatches, heart and physicality taking weaker teams to around 60 minutes before things tease apart.

Hooker Bismarck du Plessis made it 26-0, Francois Louw 33-0 and then Habana struck twice in two minutes to for 47-0 on the hour.

By 60 minutes the South Africans were rampant. Flanker Louw muscled over for his second try and 52-0, centre Jesse Kriel for another and just as fans began to peel out of the stadium, winger Lwazi Mvovo dotted down in jury time 64-0.

Pure and simple it was a shut from South Africa.