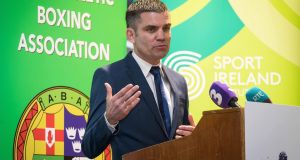 Sport Ireland (SI) has given the Irish Athletic Boxing Association (IABA) until June 30th to get their house in order or else funding for boxing will be suspended.

SI added that there remained significant issues of concern within the IABA and unless the association adheres to the terms and conditions they signed up to with SI, that funding will cease on July 1st.

SI added that the IABA must introduce a new rule book as agreed in the Rio Review and must also address what the SI see as inadequate governance within the sport that saw former Irish coach Billy Walsh depart last year and Bernard Dunne, the IABA’s s current High Performance Director, be refused a position as manager to the Irish boxing team for the European Championships.

“In order to satisfy the Board of Sport Ireland that it has successfully addressed the breach of the terms and conditions, by June 30th the IABA must introduce the proposed new Rule Book which is required to further implement ‘Boxing Clever’ and the Rio Review. Further it must address the inadequate governance arrangements which are giving rise to the current difficulties,” added the statement, which went on to say that it did not recognise an alternative chairman voted in by five IABA Board members in March of this year.

The IABA has to date received 75 per cent of its core and high performance funding for 2017 which means the organisation is fully funded until the end of September. This decision will not impact Sport Ireland’s direct athlete investment through the International Carding Scheme in 2017.

That means whatever decision SI take on July 1st, individual boxers will continue to receive their state grants in the lead into the World Boxing Championships later this year.