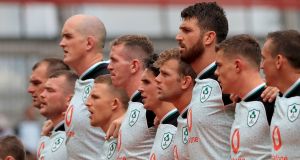 South Africa-born Jean Kleyn (third right) lines out with the Ireland team ahead of the game against Italy at the Aviva Stadium last Saturday. Photograph: Donall Farmer/PA Wire

The residency rule had social media seething this week. South African-born Jean Kleyn was in and Kerry’s Ultan Dillane had been ditched. It struck a negative chord with those who believe being Irish is something other than a set of rules.

Jamie Heaslip was the Ireland number eight. He was followed by South African-born CJ Stander, although an aside is that Heaslip’s unequivocal view is Jack Conan is currently the in-form Irish number eight.

But Heaslip knows what Stander and Bundee Aki would have experienced and now Kleyn, who has been retained by Ireland head coach Joe Schmidt to travel to Portugal for warm weather training.

“Bloody hell, people gave out to me at times for not being Irish because I was born in Israel,” he says. “I’ve been told I shouldn’t have played for Ireland because I’m not Irish because I wasn’t born in the country, when my dad was representing our nation in a peacekeeping capacity. How does that make me not Irish.”

His father, Irish Brigadier General Richard Heaslip, was there on duty with Unifil and one of the founding officers of the elite Army Ranger Wing, Ireland’s special operations force. As Kleyn is now and Aki before him, Heaslip was unable to avoid abusive social media commentary from a cohort of the similarly minded.

“It happened at various different times. You know when they do the New Zealand and Australia teams of ‘what they would look like if they were all born there’ and I think they did one or two with Ireland. These are people who, in the same sentence, named ROG [Ronan O’Gara] as well because he was born in the States. Know what I mean.”

Kleyn was able to secure an early release from his contract with Western Province in July 2016, leaving South Africa to join Munster on a three-year contract prior to the 2016-17 season. He made his competitive debut in September of that year, when he came on as a substitute against Scarlets. He was capped for Ireland for the first time against Italy last Saturday.

It is the latest example of how international rugby based on needs must has become transactional, an investment. Just as Barcelona-born, dyed in the wool Leinster man Jordi Murphy moved from Leinster to Ulster for career reasons, so too has Kleyn moved from South Africa to Ireland for career reasons with both parties benefiting hugely. Nationality in rugby has become defined by a set of rules, which was three years and is now five years residency. Leinster’s James Lowe will be available next season.

“I’ll never go against the guy for trying to make it somewhere else and making a career out of it. Fair play to him,” says Heaslip. “You’ve got to respect the guy from leaving his home to pursue this and others too, CJ, Richardt [Strauss], Bundee. These guys left home to do it. It’s a brave choice I think.”

But he stops short of calling social media abuse of non-Irish born players racist and, in truth, much of it isn’t. Some describe it in a pejorative way arguing it is a cynical manipulation of the rules by the IRFU, although the player gets the shoeing. The corollary of that is why it is cynical if it is lawfully within the rules and common practice among a number of countries, notably the best in the world, New Zealand.

“I’m not going to weigh in on that [racism],” says Heaslip speaking at a Guinness event on female rugby pioneers. “But in terms of reflective, of being all inclusive which, as a country, we’re trying to be, I think it’s a good reflection of that.

“If you look at the demographic how it’s changing. I think it’s exciting in Ireland. Our country is made up of people from all sorts of backgrounds, all sorts of cultures, we’ve been very open as a country. When you think that we were quite conservative for years and years and years, we’re actually quite open now. I definitely want to be part of a country that has that.

“People can’t help where they’re born or born into. I suppose it’s all about their actions in the then and now. Kleyn for example, he took his opportunity on Saturday. As a player, you get your chance to take the jersey off the peg and put it back on. He took it off the peg, wore it well and put it back on.”

It’s interesting how players can accept the rules more easily than others looking in from the outside. It is the players in the trenches, taking the knocks and the criticism and the injuries and also together making commitments for each other in a brutal sport. All positive and binding forces, all boxes Kleyn has ticked.