Despite a quiet representative union debut for the Saxons, England look set to give former league star every chance 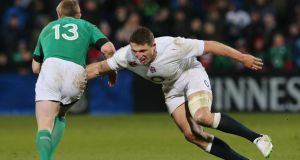 It seems when rather than if he will make it to Stuart Lancaster’s England side. Players have come from league before Sam Burgess but few with the comet tail of accolades that followed him to union and Bath from the Rabbitohs just a few months ago.

Even then Burgess touched down in England after an epic goodbye in Australia, where he was Rabbitohs’ ‘Franchise Player’, a catalyst, a leader and their most valuable player. Shipping a fractured cheek bone in his first tackle of the National Rugby League final against Canterbury Bulldogs, his side went on to win their first title in 43 years with Burgess also claiming man of the match and the international rugby league player of the year award.

Former and current Leinster players Lote Tuqiri and Ben Te’o were alongside him that day. But it was a Hollywood cameo that stole the show with a tearful Master and Commander, Russell Crowe, a part owner of the Rabbitohs, hugging his departing star farewell.

England, Ireland, Scotland and Wales have tried code breaking before with varying degrees of success and there is no guarantee that Burgess will be the player Lancaster has been looking for. The cheekbone fracture delayed his start with Bath with his debut in the club arriving in December where he slipped into inside centre from the bench against Montpellier. Later that month he played as a blindside flanker, which keeps the debate alive as to whether the former league forward is a union centre or wing forward.

Both positions have been mooted by the England camp. But the centre pairings are where Stuart Lancaster has been feverishly changing and where Burgess could have most impact. Although the England coach has largely gone with Brad Barritt and Manu Tuilagi, prior to the 2014 November series of matches he had used eight players in nine centre combinations including Billy Twelvetrees, Owen Farrell, Luther Burrell, Jonathan Joseph, former Wigan player Joel Tomkins, who has returned to league and former St Helens player Kyle Eastmond, who now plays in the centre with Bath.

It’s Tomkins career as much as any that would put down warning markers for union ambition. The league second row forward played for Wigan and Widnes until 2011 when he joined Saracens. Following good form for Mark McCall’s side, the vacancy of the England number 13 jersey arrived when Tuilagi was injured. Tomkins was selected at outside centre to face Australia in November 2013 where he made his debut in a centre partnership with Twelvetrees.

In June last year the prodigal son took a wage cut and returned to Wigan with three union caps.

Others like Irish winger Brian Carney played full careers at the top of league with Wigan, where he became the first Irish player since Tom McKinney in 1957 to play with Great Britain. At 30-year’s old his return to Ireland and union with Munster was late but Carney was fast tracked into the Irish squad that year and although he travelled, he did not play in the 2007 World Cup in France.

Other players have crossed codes and illuminated the game with Jason Robinson comfortably among England’s best strike running fullbacks. Australia’s Israel Foleau, Tuqiri and All Black Sonny Bill Williams point to what impact successful conversions can produce in southern hemisphere union. There are others: Chris Ashton, Andy Farrell, Iestyn Harris, Henry Paul, Wendell Sailor and Brad Thorn, the first player to win a World Cup, a Super Rugby title and the Heineken Cup.

It’s those players the 6’5’, 18 stone 26-year-old Burgess hopes to emulate and he arrives in England with his reputation as high as it could possibly be. Unafraid to place expectations on his shoulders he has been called no less than England’s answer to Sonny Bill, a big, ball playing league forward who can transfer his skills into a union back line.

“Sonny Bill Williams is a rugby league forward playing as a union back,” said Lancaster stoking the fire. “That’s a much easier transition and is probably the closest comparison.”

The timing of the change is clearly geared towards the World Cup and is typical of a player who has always been bold enough to carve out his own career path. Burgess made his Super League debut at 17-years-old with Bradford Bulls. At the same time the teenager was caring for his terminally ill father Mark, who was struggling with Motor Neurone Disease. He has spoken of how personal tragedy toughened him up and gave him the strength to make hard decisions from the beginning.

This current move from stardom and the bosom of Crowe, who became a family friend, to what is now a less celebrated job in Bath is no different. After initially leaving for Australia on his own after Crowe invited him and his mother Julie onto the set of Robin Hood, which was being shot in England, he has again left his close knit family in Sydney, where the four brothers Sam, George, Tom and Luke played together.

“Anyone who goes to Australia when they are 18 years old to try to find a tough level of competition because he wants to challenge himself, says something about the individual,” added Lancaster. “Clearly he is a world-class player, but what impressed me more was his maturity, his leadership, his mental toughness, his ability to inspire his team-mates.”

They are qualities the England coach has always admired from the early days when he took the squad to the straight talking north for training sessions. Perceived then as arrogant and pampered but ineffectual, Lancaster has always been a believer in attitude as much as ability.

In Burgess he’s fortunate to have both. Transformation in Australia has turned him from a hard running forward in England to one that added edge and huge tackles to his game in Sydney, where they call him ‘Slammin Sam.’ Blessed with both bulk and athleticism, his physique is why many hopes rest on him playing in the centre more so than the back row. The Bath born former England centre, Jerry Guscott, has even weighed in and believes the centre position is an easier option for Burgess than flanker.

“I’d be surprised if he ended up playing as a flanker or number eight, simply because he won’t have time to get to grips with the technical intricacies – scrummaging, line-outs, driving mauls, the tackle area,” said Guscott. “For this reason most successful converts have made names for themselves in the three-quarters.

“Given his athleticism and skill-set, he seems tailor-made for inside-centre. If he played with Kyle Eastmond for Bath, you’d likely have Burgess offloading to him. It would probably be the same if he played alongside Jonathan Joseph.

Most of his play with Bath has been in the centre but in league there are set plays, where the contact area can be determined. Players don’t have to read it as much except in offloads. In union, Burgess must learn to read the contact area, see whether it is quick or slow ball and whether he needs to get involved or not. Those decisions have to be made constantly along with an understanding of phase play, where he has to make decisions not just as a ball carrier but as a support runner.

He isn’t there yet. But England are banking on his massive physical potential, his heart and his footballing intelligence to make it happen quickly. On those things, like Sonny Bill Williams, he has never failed.