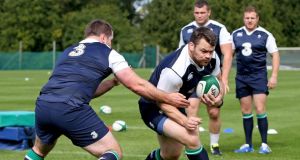 Ireland forwards’ coach Simon Easterby expects loosehead prop Cian Healy to be ready to return to play at the end of August but that team management “don’t want to put too much pressure on his return”.

Easterby confirmed that the medics are satisfied Healy is making satisfactory progress from the neck operation he underwent in May.

“Cian Healy is progressing nicely, and working week to week with the medical team. We’re giving him the best opportunity to get right over the next couple of weeks so we can hopefully include him towards the end of August.”

When asked whether the Lions, Ireland and Leinster prop had suffered any setback in his recovery, and whether suggestions last week that he was struggling to be fit were alarmist, Easterby suggested: “Referring to what was said last week, he is doing his rehabilitation programme and it’s going according to plan.

“I’m not sure. I think the medical team are on top of things and they’re pretty comfortable about how it’s going. We have to obviously take advice from them in terms of where they feel Cian is and at the moment we’re just taking it week to week. We don’t want to put any more pressure on the situation.

“It’s a case of him going through the rehabilitation and that will hopefully continue to improve as we go week to week.”

Given Healy’s experience and importance to the team and the squad, the question was posed to Easterby about whether he’d be afforded every opportunity to prove his fitness ahead of trimming down the numbers to the 31-man World Cup squad, even it if meant missing a number of the warm-up matches.

“They’re Test matches and it’s important that we have guys who are fully fit. It’s not ideal for any player not to get game time during this period, but we have to take a view of each individual and make sure we do the right thing by them. That will be the case with all the players who might be coming back from surgery. We’ll make sure that we re-introduce them to game time as and when (it’s possible).

“It is a week to week thing and we don’t want to put too much pressure on his return. I think he’s progressing nicely at the moment, but we’re not going to put any timescale on it.”

Easterby confirmed that Luke Fitzgerald, Seán Cronin and Marty Moore are progressing well following their operations but none are in contention for a place against Wales at the Millennium Stadium on Saturday.

“There are the obvious guys who came back from shoulder surgery, so Luke Fitzgerald, Marty Moore and Seán Cronin, are all progressing nicely. They’re going through their rehabilitation programme and working hard to get back to full fitness.

“I think you can probably take it that those guys who have come back from surgery, it’s difficult for those guys to be selected when they’ve a continual programme of rehab. None of them are far away at all, which is great for us. Hopefully before long we’ll have a full deck to select from.”

In relation to Saturday’s game in Cardiff, Easterby admitted that gauging performance values were more important than simply dwelling on the outcome of the match.

“I think the most important thing is that we get performance from individuals, from combinations, units and then we’ve got something to work from. That’s probably our priority; that our performance and accuracy is really good, and then we can build on that throughout August.”

He suggested that Ireland wouldn’t be showing their full hand in the warm-up matches. “We wouldn’t be throwing everything back there in each game, but a combination of things. It’s important that you test these things at the Test level and that’s probably the way we’re going in terms of strategy for the game.

“We want performance first and foremost and with that comes a little bit of familiarity to things we might have done in the past and also some of the things we might want to build on going into the World Cup.”

Ireland will look to next week’s game against Scotland as a chance to give more players game time before the squad takes a more definitive shape later in the month and leading up to the final warm-up game against England in September.

“You have to look at the bigger picture a little bit when we set off to the World Cup and the Canadian match; (it’s about) working back from that. We will view it probably after this weekend, look at who we think needs to get game time, next week (against Scotland).

“Then we’ve got a break and two more Test matches to come. We’re one of the few teams that has four Test matches, so it does give us that added advantage in seeing a few more combinations during this period.”

1 Betting shops face uncertain future as they prepare for Monday reopening
2 Ian O’Riordan: An education in race and running during college days in America
3 The Irish Times shutdown sports quiz: Part three
4 Timo Werner giving up on Liverpool dream on path to being truly wanted
5 Tianna Bartoletta: ‘After you’ve gotten your medal, you become black in America again’
Real news has value SUBSCRIBE