Shane Williams: ‘We are probably the most fickle nation ever’ 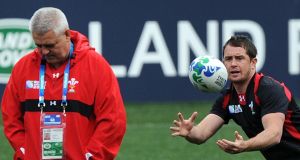 Shane Williams with Warren Gatland. “I think it will be a little too much for Wales. I hope I’m wrong but, for me, Ireland have played the best rugby in this championship so far.”

Warren Gatland’s 11 seasons as Wales coach – minus two sabbaticals in 2013 and 2017 due to the Lions – have delivered two Grand Slams and three Six Nations titles to sit beside bitter disappointment at both World Cups.

“If he had won that World Cup he probably would have gone back [to New Zealand],” ponders Shane Williams more than stating a fact.

“Who knows? But because he didn’t win that World Cup I think he really believes that is something Wales can do. It’s no surprise he is going to try and do it in Japan.”

Gatland’s win record over Scotland is perfect. The England and Ireland results are one per cent shy of his overall return as Welsh rugby’s overseer: 51 percent.

However, Gatland can hardly boast about three victories from 36 Test matches against the big Southern Hemisphere trio. Williams is talking about his former coach and Saturday’s game as a Guinness ambassador. The promotional hook sees Paddy Cullen’s pub in Ballsbridge renamed in his honour on Saturday.

The Welsh record try scorer’s overall view on the Gatland era is complimentary but there is the occasional qualification.

“Relatively successful,” is the term he utters on several occasions.

“We are probably the most fickle nation ever,” said Williams. “When we win the Grand Slam everyone wanted to adopt Warren Gatland but lose a few games we are looking for someone else to come in.

“Warren has had to get used to that over the years. The majority of Wales do love him. They definitely respect him.

“Warren is very driven. Obviously, he’s had a good contract in Wales, and that’s another reason to stay, but he has enjoyed his time. He has been well received in Wales – when we are doing well. Like everything in Wales really. He has been relatively successful. Probably the most successful Welsh coach we’ve had.”

Williams identifies the same Gatland methods in 2018, the promotion of successful Scarlets players to the starting XV, that delivered instant success 11 seasons ago.

“When he came in in 2007/08 for me, personally, I enjoyed his coaching methods. He looked at the players he had and worked the game around that. He’d say, ‘Shane I haven’t got a clue what you are doing out there so keep doing it and I’ll mould things around to suit you and the team’.

“And it worked. You only have to look what he’s done with Grand Slams and championships. He’s been successful with the Lions.

“He’s always been up against it. He took over a Wales team that had been knocked out of the World Cup by Fiji and he goes and wins a Grand Slam. Goes on Lions tour when he is told they will be whitewashed 3-0 and he comes away with a draw.

“He must know what he’s doing. Obviously he has had his times when Wales have lost games against teams they shouldn’t and we’ve had the bad patches but what he has got used to is Welsh rugby.

“It’s a roller-coaster ride. I can vouch for that. He must be thinking, ‘God, what have I signed up for here?’ One minute he’s winning Grand Slams the next he’s losing games that we really shouldn’t be losing.”

The Gatland record over Ireland ranks just below the Grand Slams and Lions tours. Currently, Wales appear to have the Indian sign over Joe Schmidt’s Ireland with two Welsh victories in the past three seasons and a draw since the Irish win at the Aviva Stadium in 2014.

Williams sees that changing this weekend.

“To go through 40 phases in Paris and do what Johnny did really sums up Sexton and Ireland for me. I was in the house thinking, ‘They are going to win this, he’ll keep it in the middle of the field and he’ll slot it’.

“It will take a hell of a team to beat them in Dublin at the moment. Unfortunately I think it will be a little too much for Wales. I hope I’m wrong but, for me, Ireland have played the best rugby in this championship so far.”