Sexton set to return against Italy

Ireland’s outhalf has recovered from hamstring injury sustained against England 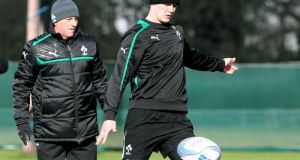 
More than a little battered and careworn, and with a dozen or so full internationals sidelined, Ireland unveil their final selection for this bruising Six Nations campaign at lunchtime today before the squad departs to Rome, with Donnacha Ryan still their biggest concern of their remaining walking wounded. If his troublesome shoulder rules him out, the likelihood remains that Devin Toner ’s line-out skills will earn him promotion to the starting team for Saturday.

Encouragingly, Jonny Sexton and Craig Gilroy appear set to return, while the vibes are hopeful regarding Luke Marshall and Brian O’Driscoll, and one imagines it would take more than a bang on the head, a dead leg and a stitched up ear to prevent O’Driscoll taking his place for what increasingly looks like his farewell in an Irish jersey.

The frontrow of Cian Healy, Rory Best and Mike Ross are set to establish a new Irish record of 21 Test starts together en bloc, eclipsing the landmark achieved by Reggie Corrigan, Shane Byrne and John Hayes. The backrow of Peter O’Mahony, Seán O’Brien and Jamie Heaslip should remain unchanged again.

Ryan has been a vital cog in the Irish pack, and has taken more lineouts than any other player in this year’s tournament, hence were he ruled out the Irish management appear keen on the idea of promoting the 26-year-old Toner for what would be only his fifth Test cap and first start in the Six Nations. As reported in The Irish Times yesterday, Toner has been running the lineout in training this week.

The uncapped Paul Marshall looks set to be named on the bench given he is the only other fit and active scrumhalf in the squad along with Conor Murray, and thus could become Ireland’s 32nd player to be used in the competition, and 36th player in seven Tests this season, as well as the 11th new cap. All those figures could rise by one if both he and the uncapped Stephen Archer (unused last Saturday) were to make an appearance in Rome.


Sell-out
Buoyed by their second-half showing in Twickenham and with the prospect of another sell-out at the Stadio Olimpico, Italy are desperate to end a 17-match losing streak with a belated first championship win over Ireland.

Jacques Brunel will also unveil his hand today, and while centre Gonzalo Garcia has been passed fit, both flanker Robert Barbieri and tighthead prop Martin Castrogiovanni are still rated doubtful. In truth though, akin to the 36-year-old Andrea Lo Cicero, Castrogiovanni’s form has wavered since the opening day win at home to France.

1 Connell losing touch with the club championship is the real tragedy of Normal People
2 Ghosts and goalposts: The soul of street football in Dublin’s Gloucester Diamond
3 Rugby clubs in crisis: ‘I fear a lot of players won’t go back playing at all’
4 Ian O’Riordan: Dreaming of one-way cycling over the Military Road
5 Liverpool and Everton to oppose plans to play games at neutral venues
Real news has value SUBSCRIBE

Connell losing touch with the club championship is the real tragedy of Normal People 09:00
Michael Walker: Fans wish to be supporters, not spectators. There’s a difference. 08:00
Ghosts and goalposts: The soul of street football in Dublin’s Gloucester Diamond 07:00
Ian O’Riordan: Dreaming of one-way cycling over the Military Road 06:00
Rugby clubs in crisis: ‘I fear a lot of players won’t go back playing at all’ 06:00
Here is your handy guide to sport on television this week