Semi-finals a bridge too far for Ireland U-20s 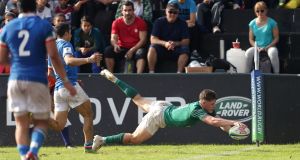 Ireland’s bonus point victory wasn’t sufficient to see them through to the semi-finals of the World Junior Championship but it should in no way detract from the remarkable physical effort that this young squad produced to secure a deserved win.

Playing a third game in eight days, Ireland battled fatigue, an extensive injury list and a mini Italian revival either side of half-time to forge a hard-earned victory on a day when the mercury exceeded 22 degrees in Santa Fe.

World Rugby would want to have a long, hard look at what they demand of young players under the current tournament format; it’s ridiculously punishing physically to a point where there are genuine health and safety concerns. In the final quarter bodies from both sides were festooned around the pitch through cramp and exhaustion and that doesn’t take into account injured players.

Character and courage in adversity have been core constituents in everything that the Six Nations Grand Slam champions have achieved this season, complementing the obvious talent of Noel McNamara’s charges and those qualities were once again evident in a gutsy performance.

Ireland chased points from the get-go and at 31-0 ahead two minutes before the interval - they had secured the four try, bonus point - had accomplished much of what would have been spoken about and hoped for prior to the match. They’ll be disappointed, though, with a little mental laxity either side of the interval that saw them cough up a couple of converted tries.

A fifth try from the outstanding Ryan Baird on 54-minutes - his carrying, tackling and lineout work were exceptional - nudged Ireland out to 38-14 with a quarter of the match remaining; the tank though was empty and it largely explained some errors that prevented Ireland from adding to that tally. It would be harsh to dwell on any negatives when weighed against everything that the group has had to overcome.

Sale Sharks flanker Ciaran Booth departed on a stretcher with what appeared a tournament ending leg injury, the victim of a torpedo clear-out; if its deemed legal then the laws need to change to protect vulnerable players at ruck time. Ireland also lost Angus Kernohan, Thomas Ahern, excellent in his brief debut and David McCann, who had another superb game, to injury.

Ben Healy controlled the game beautifully for the most part with his kicking, both out of hand and from the placed ball, flawless. Colm Reilly was a sharp presence at scrumhalf, Cormac Foley filled in admirably at centre but it was the lung bursting efforts of the pack and in particular Josh Wycherley, Michael Milne, Baird, McCann and number eight Azur Allison that underpinned the victory.

There were just two minutes to the interval when Italian coach Fabio Roselli made five changes simultaneously to his starting line-up. Ireland were then left to rue a little sloppiness that saw them concede tries to Italian scrumhalf Alessandro Fusco and a penalty try one minute after the re-start when the Italian scrum was motoring towards the Irish line.

Paolo Garbisi converted both and at 31-14, Ireland’s points’ differential looked less rosy. Baird’s try provided temporary impetus but with both sides out on their feet and in frequent need of medical attention there was an understandable drop-off in quality. Ireland might have scored a couple more tries but it’s a sentiment that Italy might legitimately share too.

South Africa will face world champions France in the elite semi-final with hosts Argentina taking on Australia in the other match.