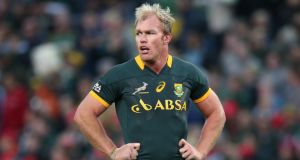 Schalk Burger of South Africa will line out against Ireland on Saturday. Photograph: David Rogers/Getty Images

Today Schalk Burger is urbane, courteous, a smiling, open book. Yes, there’s Luke Fitzgerald, who may hold a bolder view on the Springbok flanker. In 2009 Burger was yellow carded for what Fitzgerald, then a callow Lions’ winger, called his first ever eye gouge.

But on a crisp Dublin day it is like a lifetime removed and five years on there’s a faint smile on the face of the barnstorming Burger and maybe even the hint of regret.

“Myself and Luke Fitzgerald had a bit of a small argument in the first minute of the game. And that followed me over here. These things happen,” he says .

“If you look back on your career, I’m sure you’ll always regret a few things. This is the way life happens. It’s a long time gone. Okay you feel a little sheepish about it. Rugby is one of those games where I’ve always worn my heart on my sleeve. It’s probably not my proudest moment. But it’s happened.”

Burger is on the bench on Saturday although there’s a strong hint from Springbok coach Heyneke Meyer that he sees the replacements as impact players, the Japan based flanker will see pitch time. Burger’s trademark is impact. Bakkies Botha is there, JP Pieterson, Pat Lambie. More impact.

His six yellow cards at international level, just one off Marco Bortolami’s bad boy record, is a body of work that draws just a shrug. He’s faced it before. It’s who he is, what has made him a former IRB World Player of the Year, earned him 73 caps for the Springboks and – after a high tackle in the 2007 World Cup and a two- match suspension – a winner’s medal. Burger also has reason to be philosophical.

The flanker had a cyst removed from his neck last year but contracted bacterial meningitis so serious that there were genuine fears for his life. Prior to that he had a bad knee injury and when he returned to play in late September 2013 it was his first competitive match for 18-months.

“Just getting back playing rugby was a big goal for me,” he says. “Then after that, you get greedy and want more. For me it’s lovely being back. Japan is different. We live in Tokyo so it’s tough to get used to the hustle and bustle. Whenever I feel a little encroached, I go to the old man’s vineyard (Welbedacht Wine Estate), sink a few bottles and hit a few (golf) balls into the dam. “

Nice. But when he returned Burger was sucked into an unwanted media storm as Teboho “Oupa” Mohoje was chosen to pull on the shirt worn by Francois Pienaar, Joe van Niekerk and Juan Smith, not Burger.

Accusations of colour quotas and the race card were aimed at the innocent Mohoje, who when picked in September ahead of the 31-year-old had just five Super Rugby starts. Right now, it’s not a topic to rehash.

“The real importance for us off the bench is knowing you are going to have a big influence on the game. Normally the ideal situation for us is to come on when the game is all wrapped up and you can express yourselves. But sometimes it calls for something different,” says Burger.

“When you start a game, it’s pretty easy. You plan your game from the start. When you’re coming from the bench, you have to be pretty open-minded… Listen, it’s just great being back with the Boks. I’m enjoying the time. I said before I joined up, I’ll fit in any situation rather than tight-head prop.”

There’s a new emphasis on Meyer’s team and a launch pad of eight games between now and the World Cup next year. The coach needs some experience in the squad to counter the vein of younger talent he’s brought through. Burger brings that and in the twilight of his career also formidable and respected reputation.

“I think the team is pretty settled and in a good space,” he says. “We need to have clarity of mind because execution is so much better. We’ve had a bit of a break now. Some times when you are playing well, it’s best to get on with it and keep playing.

“Now we can slot in to Test match intensity, which is a step up for every one. There is always an added edge with a Test match. When you are involved with the Springboks side you feed off their energy. It’s a wonderful position to be in.”

Burger knows it and perhaps differently from before relishes the environment and his place in the South African team. Now, along with Botha, Jean de Villiers and Victor Matfield he’s something of a patrician but with a past. Once again, a future too.

1 Gary Neville in Qatar an exercise in semi-journalism
2 Six Nations: Ireland are contenders but England still the team to beat
3 Owen Doyle: Creeping professionalism of schools rugby a threat to the game
4 The world spins but it’s soon back to Dublin and Kerry
5 Weekend hurling previews: Tipperary aiming to make an opening statement
Real news has value SUBSCRIBE

The world spins but it’s soon back to Dublin and Kerry 06:00
In Donegal Michael Murphy is seen, simply, as a godsend 06:00
Allianz Football League weekend previews 06:00
Liam Cahill uses playing regrets to drive him as Waterford boss 06:00
Weekend hurling previews: Tipperary aiming to make an opening statement 06:00
Here is your handy guide to sport on television this week