Sam Warburton returns to lead Wales against the All Blacks 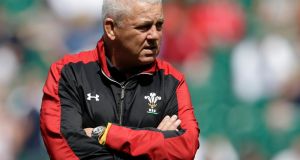 Warren Gatland has been able to name captain Sam Warburton in his starting XV for Saturday’s game against New Zealand. Photograph: Reuters

Wales captain Sam Warburton has recovered from a shoulder injury and will lead his country in Saturday’s first Test against world champions New Zealand at Eden Park, Auckland.

Warburton, who has not played since April 30th, is among five changes from the side beaten 27-13 by England in a tour warm-up fixture at Twickenham 10 days ago.

Elsewhere, there are starts for long-serving prop Jenkins and Scarlets hooker Ken Owens, with centre Jonathan Davies returning to midfield alongside Jamie Roberts.

Uncapped Cardiff Blues flanker Ellis Jenkins, meanwhile, is named among the replacements after being rushed into Wales’ squad just before departure for New Zealand after Dan Lydiate suffered a shoulder injury during the England game.

Wales head coach Warren Gatland said: “We have made five changes since our last hit-out, and there is an opportunity for a number of players.

“It’s an opportunity for a couple of boys to start, and we are bringing in experience with Gethin, Ken and Bradley.

“In the midfield it’s nice to have that experienced combination back, and the players who move to the bench will still have an impact on game-day.

“We are under no illusions how tough the Test series will be against the back-to-back world champions, but the players are also aware how important this tour is.

“We’ve had a great welcome down here in New Zealand. The New Zealand public have again made us feel very welcome, and there is a good feel to the Test series.”

Wales have never beaten the All Blacks in New Zealand from seven previous attempts, while their last victory over them was in Cardiff 63 years ago.