Sam Warburton could yet start for Wales against Italy 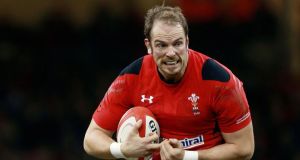 As it stands: Alun-Wyn Jones will captain Wales in their Six Nations opener against Italy on Saturday, with Sam Warburton among the replacements.

Sam Warburton could start Wales’ RBS 6 Nations opener against Italy on Saturday as he prepares to make his comeback from injury.

Warburton, who has been sidelined for two months because of a shoulder problem, is currently on the replacements’ bench with lock Alun-Wyn Jones taking over from him as captain. But Racing Metro flanker Dan Lydiate left Wales’ training base on Tuesday, flying back to Paris, where his fiancé is expecting the couple’s first child.

If Lydiate is ruled out, then Warburton will be promoted to the starting line-up.

“Whether Dan Lydiate gets back for the game or not, we will play that one by ear and see what happens over the next few days,” Wales coach Warren Gatland said. “His fiancé has gone into labour. I have spoken to Dan and said to take a few days, and if he gets back on Thursday or even Friday we will be able to accommodate doing without him for a couple of days.

“We always stress with the squad about how important family is. I did speak to him to see if he wanted the weekend off and perhaps think about the following week, but he is adamant he wants to get back and play, so fingers-crossed it is not a false alarm and he has gone back to Paris for the birth of his child.”

Wales skipper Warburton has not played since the autumn series finale against Australia on November 30th, and Gatland’s current plan is to ease him back off the bench. But he would also have no qualms pitching Warburton straight into the Test arena when Wales begin their bid for an unprecedented hat-trick of Six Nations titles.

“As a squad, this is the hardest team we’ve had to pick for a long time, whether it was the starting XV or the bench,” Gatland added. “We’ve felt Rhys has been playing quite well for the Scarlets. It is a little bit hard on Dan — he obviously did well in the Six Nations last year and has been playing well. It was a tough call.

“We had a good discussion about 10, as we did about the front-row. “We sat down with Gethin and made a decision that he was fit (following a knee injury), but we felt that he just needed a little bit more time. It is a good opportunity for Paul to get a run-out and play and for Gethin to do another week of conditioning and be in contention for next week.”

Gatland also confirmed that British and Irish Lions Test centre Jonathan Davies is continuing excellent progress from a serious pectoral muscle injury he suffered playing against South Africa in early November. Davies has been released back to his regional team the Scarlets, and he could be involved against LV= Cup opponents London Irish on Saturday.

Gatland has made no secret of Wales’ burning desire to land a third successive Six Nations crown, but he is also not looking beyond Italy’s Millennium Stadium visit this weekend.

“We have picked what we think is the strongest team we can pick for this game. It is a sign of the respect we have for the Italian team and how tough they are going to be, but it also means we are in a pretty good place as a squad in terms of where we are now and hopefully where we are going for the next 18 months.”

1 Ireland v Scotland: Doris’ day as Caelan set for first cap
2 Gerry Thornley: Temple Carrig are the true schools rugby story of the season
3 In mourning Kobe Bryant mourn the bad as well as the good
4 Ashleigh Barty now living up to all her earlier promise
5 Owen Doyle: Breakdown of law and order in rugby must stop
Real news has value SUBSCRIBE