Lions captain will be released to play for Cardiff Blues 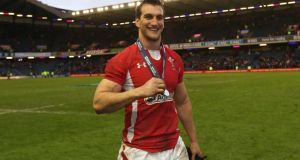 Captain Sam Warburton has become the first Wales player to sign a central contract with the Welsh Rugby Union.

The 25-year-old flanker, who skippered the British & Irish Lions to glory in Australia last summer, was due to be out of contract with the Cardiff Blues in the summer.

There were fears he would join the growing exodus out of the Welsh domestic game, but he will remain in Wales after agreeing terms on a “national contract” with the union.

In a WRU statement, Warburton said: “I am delighted to commit my future to Welsh rugby. I would like to thank the WRU for its commitment to me.

“I also want to take this opportunity to thank my agent, Derwyn Jones, who has supported and mentored me from a young age and always had my best interests at heart.”

The WRU intends to release Warburton to continue to play for the Blues, at no cost to the region, while he will be available for all Wales duty, although he will not be guaranteed a place in Warren Gatland’s squad.

The WRU previously wanted to offer winger George North, now at Northampton, a deal to remain in Wales, only to discover the regions had an agreement not to field a centrally-contracted player.

The Cardiff Blues have yet to respond to the news of Warburton’s deal; on Friday chief executive Richard Holland said they had made the backrower the best offer they could.

WRU chief executive Roger Lewis said: “We have been able to strike a deal which ensures the Welsh captain will continue to play his rugby at the highest level here in Wales.

“I am extremely grateful to the Cardiff Blues chairman, Peter Thomas for his understanding when the WRU chairman and I met him on Wednesday to outline this proposed plan.

“Welsh rugby together cannot stand back any longer and watch its best players leave Wales. We all have to act together and act now in the best interests of the game.

“There can be no better message to current and future internationals than the decision of Sam Warburton to become the first senior player to sign a WRU national contract and commit to regional rugby and international rugby in Wales.

“This is all about us working together in the best interests of rugby in Wales and I am sure this will be remembered as an important moment for rugby in Wales.”

The WRU is also hopeful of concluding a new participation agreement with the regions, and of a resolution to the saga over the European game.

The statement continued: “Negotiations are progressing between the WRU and all four Regions towards agreeing a new Rugby Services Agreement and the six nations meetings over European rugby competitions continue in a positive fashion with further discussions planned for Monday.”