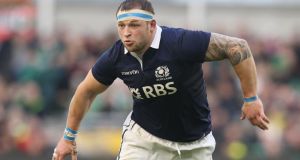 Glasgow prop Ryan Grant has been recalled to Scotland’s RBS 6 Nations squad after being acquitted of an assault charge. The former British and Irish Lion was left out of Vern Cotter’s original 32-man squad while the case against him went to court. But after the charges were found “not proven” at Glasgow Sheriff Court, the Scottish Rugby Union has cleared the 29-year-old to return.

In a brief statement, Scotland chiefs confirmed: “Glasgow Warriors loose-head prop Ryan Grant has been added to the Scotland squad for the forthcoming RBS 6 Nations.” Warriors team-mate and fellow Dark Blues international Ryan Wilson faces a disciplinary hearing next week after he was convicted of a double assault.

The flanker was suspended by the Scottish Rugby Union last week after being convicted of assaulting two men, including fellow rugby player Ally Maclay, during a halloween night out in October 2013.

Kirkcaldy-born Grant – who has been capped 19 times for his country since his 2012 debut – will rejoin the Scotland squad at BT Murrayfield on today as preparations for Saturday’s championship opener against France in Paris are stepped up.

France will also miss number eight Louis Picamoles who picked up a thigh injury in Toulouse’s 13-9 Top 14 win over Castres on Saturday and was not included in Sunday’s list. Fullback Brice Dulin was included in the squad after recovering from an arm injury. Saint-Andre is expected to name his starting line-up on Thursday.

In the England camp, Sam Burgess is to spend two days with the senior squad that is preparing for Friday’s Six Nations opener against Wales.

Burgess made his union representative debut for the Saxons against the Wolfhounds in Cork and will now join up with Stuart Lancaster’s men at their Pennyhill Park training base. “Sam will just come into camp for two days to further his rugby experience before returning to Bath to get more game time over the next few weeks,” Lancaster said. “He’s still learning the game and this is an opportunity to help his development.”