RWC #14: Billy whizzes past the Wallabies 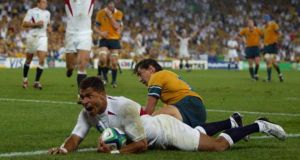 Jason Robinson slides over to score against Australia in the 2003 Rugby World Cup final. Photograph: Getty

Sam Burgess made the switch to rugby union having reached the pinnacle of league when he guided the South Sydney Rabbitohs to their first NRL Premiership title in 43 years, producing a man of the match performance in the Grand Final despite breaking a cheekbone in the game’s first tackle.

It is still too early to tell if Burgess’ switch will prove a success, but whatever happens it will be difficult for him to pass the benchmark set by the greatest cross code player of the modern era.

Jason Robinson swapped league for union permanently in 2000, leaving Wigan to join Sale Sharks, and a year later he was earning his first Lions cap before he had even started for England.

He introduced himself to the world with a bang with the opening try in the opening Test, standing up a helpless Chris Latham, stepping and leaving him for dead on the outside.

Two years later and ‘Billy Whizz’ was at it again, but this time on the grandest stage of all.

Four points to the good approaching half time in the 2003 World Cup final and inside the Australia 10 metre line, England made a half break thanks to a bullocking run by Lawrence Dallaglio, who switched inside to Jonny Wilkinson.

Wilkinson moved the ball back outside to Robinson, a blur of white shirt and white boots, who devoured the 22 yards in front of him and slid over in the corner.

As the ball reaches the diminutive winger Australia actually have good cover through Wendell Sailor and Mat Rogers, who puts in a token slide after Robinson has already smoked him and crossed the line.

But Sailor, who had crossed codes himself in 2001, barely bothers once he’s seen the ball reach Robinson. He knew.

The boy had rockets in his boots.