Rugby World Cup: There’s no avoiding the All Blacks but the later the better

Springboks would have offered offer a different challenge, although one with more opportunities 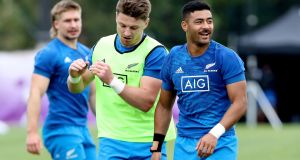 Over the course of 2019 the magnitude of the task facing Ireland were they to reach the Rugby World Cup quarter-finals has grown. Now, as it potentially looms into view next weekend, it has never seemed so daunting.

There is, of course, work to be done in the shape of beating Samoa in the final Pool A game on Saturday to nail down qualification. If they do, Ireland were then always likely to be facing either the back-to-back champions New Zealand or South Africa.

Ever since the All Blacks beat the Springboks on the opening weekend the reward for winning Pool A always looked being a quarter-final against the latter with an eight-day turnaround. Finishing runners-up would mean a seven-day turnaround before facing New Zealand. And so, with the cancellation of the All Blacks’ Pool B finale against Italy in Toyota City, it has come to pass.

Topping Pool A will effectively require wins for Ireland and Scotland. An ensuing eight-day turnaround for a quarter-final against South Africa for the prize of a first World Cup meeting against England has always appeared the more preferable route, even if these things are decidedly relative. In any case, little about the All Blacks’ compelling 23-13 win over the Springboks on the opening Saturday has altered that view.

True, the sides had gone into that game with one win apiece and a draw in their previous three meetings, with each having scored precisely 82 points against each other.

This may suggest there is nothing much between them on a given day, and for the first quarter the Springboks threw the proverbial kitchen sink at the champions, frequently winning the collisions on both sides of the ball.

Whereupon, having rolled with the punches, the All Blacks sprang into life, scoring 17 points in six minutes. No other team has the same capacity to score two or three quickfire tries, or to transition from defence to attack so lethally.

The decisions by Steve Hansen and his think-tank to virtually recast their team looked thoroughly vindicated, not least in switching Beauden Barrett to fullback and including Richie Mo’unga as a dual playmaker, while also in accommodating a second ‘openside’, Ardie Savea, in the backrow. With Kieran Read not the rampaging number eight of yore in the outside channels, Savea’s inclusion added some potent ball-carrying ballast into the All Blacks’ backrow against the Boks.

Even before that game, Hansen had forewarned everyone. “The one thing I do know is that if we play to the best of our ability then it doesn’t matter who we play; they’re going to have to play really well to beat us and if they do so then well done to them and we have to accept that.”

“But if they don’t,” he said, pausing, “then they may have to accept the consequences.”

The Springboks did demonstrate their resilience and strength with their recovery in the second half and there’s a theory that the All Blacks would not bash up Ireland in the manner South Africa might do with their unrelenting physicality.

Furthermore, Ireland have removed a considerable historical monkey from their shoulders in twice beating the All Blacks in the last World Cup cycle. The flip side of that coin though is that Ireland will command their respect like never before.

With seven wins and a draw in 26 meetings, Ireland do not have the same historical baggage with the Springboks and they have also won two of four meetings in this World Cup cycle.

Yet the All Blacks still look a cut above everyone else and the decision to switch Barrett, twice the World Player of the Year at outhalf since the last World Cup, looks like a masterstroke. Hansen and Ian Foster appreciate that fullback is the relatively unmarked position on the pitch and by rights should be a team’s best attacking player. And Barrett, even from a litany of X factor players, is just that.

Both Paul O’Connell and Alan Quinlan, in their roles as ITV pundit and co-commentator, have gone along with the view that were Ireland to beat Samoa and reach the quarter-finals, it would be preferable for them to face the Springboks rather than the All Blacks.

“If it comes to it, I think we may have a better chance of unlocking and questioning South Africa a little bit,” said Quinlan. “Given Ireland have beaten New Zealand a couple of times in recent years, they’ll certainly know Ireland inside out, not that Rassie [Erasmus] won’t either.

While the Boks are a seriously physical team, they don’t deviate from their game plan as much as the All Blacks do. They have a big scrum, they launch their big men around the corner, they kick a lot and they gamble with their outside-in, blitz defence. But they do leave more space and Ireland have the plays and the players to exploit that space.

Little or nothing about the two sides’ respective paths to the knock-out stages has even slightly unhinged either the All Blacks or the Springboks, and to compound the challenge which could await Ireland if they beat Samoa, the All Blacks will have played a game less and enjoyed a 13-day turnaround for their quarter-final, while the scheduling had always ensured the Springboks of a 12-day run-in.

The holders ran in 20 tries and conceded none in 63-0 and 71-9 wins over Canada and Namibia. The Springboks have been having a blast too, not only flexing their considerable muscle but also indulging in some fluent, free-running rugby in scoring another 26 tries and conceding just one in beating Namibia (57-3), Italy (49-3) and Canada (66-7).

There is also, of course, the disconcerting level of inside knowledge which Erasmus, Jacques Nienaber and Felix Jones have on the Irish set-up. Furthermore, they have been rotating liberally through their untroubled path to the last eight.

Of the starting XV for that opening game against New Zealand, only centre Damian de Allende, lock Franco Mostert and captain Siya Kolisi lined up at the kick-off last time out against Canada. Of the others, seven were on the bench and five were rested altogether. Effectively therefore, the Springboks’ first-choice team has had a two week build-up to their quarter-final.

Hansen and co have had more of a mix-and-match approach, but as well as rotating heavily they welcomed back Brodie Retallick last Sunday against Namibia. Come the quarter-final, Beauden Barrett, Mo’unga and Read won’t have played in two and a half weeks.

Granted, their first-choice team has only played once, and that was three weeks ago which may, at a push, leave them a little rusty for their quarter-final.

Besides, if Ireland are to harbour genuine ambitions of winning the World Cup, they were going to have beat the best sides in the world, and most probably the All Blacks, at some point.

Ultimately, there’s probably no avoiding them.