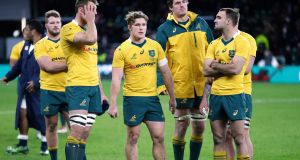 Dejected Australian players after their defeat to England at Twickenham. Photo: Henry Browne/Reuters

The Wallabies have returned home after a heavy defeat to England in front of a capacity crowd at Twickenham. Taking a beating from England is never easy for any Australian sports fan, but the result was softened by the fact that the match reports hovered slightly above the weekend’s lawn bowl results. Rugby union is largely out of sight and out of mind here.

If you don’t live in Australia, it is hard to believe that rugby union features so low on the sporting agenda. The Wallaby jersey has been worn by some of the game’s greatest players and the country’s contribution to the sport has been enormous historically, but the game is losing relevance for Australians. The country’s stadiums are barely filled and the crowds are muted.

This year the Australian Rugby Union released figures that tell part of the story. There had been a 7.6per cent reduction in players in club rugby. Essentially, 7,000 players have decided that they don’t want to continue in the game. In positive news, female participation has increased in the sevens game, boosted by Australia’s Olympic gold medal in Rio. However, many clubs are suffering from a lack of funding from the ARU and are fighting to attract players who are struggling to combine work with a game that isn’t being supported financially.

Australian children are not taking up the game the way they did in the past. Research commissioned on the top 20 sports for Australian children showed that rugby union featured 18th for children aged 14 and over in terms of participation – behind volleyball, horseriding, netball, tennis and football. Sports such as football and basketball are gaining popularity among youngsters, while Australian Rules – which has used youth programmes such as AusKick to introduce the game to children at an early age – remains far in front.

In October a group of Wallaby luminaries gathered to discuss the diminishing popularity of their sport. Whether it was at the elite level, or most pertinently at grassroots for young children, apathy had set in. Led by former captain Nick Farr-Jones, they wrote a public letter to Australian Rugby Union, declaring: “There are grave concerns with the rugby community that the continuing failure of the Australian Rugby Union to acknowledge and support the grassroots of the game will accelerate an already alarming decline in both participation and support of the game in Australia.”

The letter was typically Australian: straight to the point and demanding answers. Farr-Jones and his friends had simply had enough of watching their beloved game suffer across the country. Historically, rugby union has been a private school game, played seriously in two states, Queensland and New South Wales. The game competes for sporting affections with the universally popular Australian Football, cricket and, in the aforementioned states, rugby league. Rugby union has become increasingly irrelevant in a country with a small population blessed with sporting choice.

It is possible to see rugby league, AFL and cricket Test matches on terrestrial television but, for reasons best known to themselves, the administrators elected to televise Super 15 and test rugby on paid television. While they can use some of the TV money to fund salaries and keep the standard of play high, few Australian children know who any of the players are. It is rare to see a child in Sydney or Brisbane wearing a Wallabies jersey; their international team doesn’t resonate.

New Zealanders unite behind the All Blacks but in Australia the incredible achievement of reaching the World Cup final last year was met largely with apathy, apart from a beautifully lit Wallaby mosaic on the Sydney Opera House. After the team lost to Ireland a fortnight ago, I had to comb the sports pages to find even a small match report from Dublin.

Will the game grow from its small two state private school roots? There are ample opportunities across New South Wales and Queensland to go out into working class communities and extend the reach of the club game. The two states have mooted the possibility of replicating rugby league’s popular State of Origin game in union, but this would struggle to succeed with top level Wallabies not being allowed to compete. Outside of the private school sporting competition, state schools don’t enjoy the same sporting organisation, so, if the game is to grow, it will be done so within the club environment. Money needs to be spent urgently to build a support base in traditional league communities and unearth talented young players.

In the Super 15 competition there have been new franchises in Australian football heartlands such as Perth and Melbourne. While support for these new teams has been bolstered by strong emigrant populations from the UK and South Africa, the Western Force particularly remain in financial strife. The Perth club has recently offered 5,000 one-off $1,000 ownership certificates in an attempt to increase their coffers.

The Wallabies have wonderfully talented and charismatic players, such as David Pocock, Michael Hooper or Israel Folau, but to the majority of their compatriots they remain irrelevant. They are cheered if they beat the All Blacks, but are ignored for most of the rest of the year. To their credit, the Wallabies are trying to engage the public whenever they can. Public training sessions are regularly held at beachside grounds such as Coogee Oval. The players are available to sign autographs and pose for pictures, but the majority of the public choose to stay on the beach and enjoy the sun.

The Wallabies recent results don’t do them any favours, but the problem of keeping Australian rugby union relevant goes far deeper than for spectators and casual fans. Alongside the traditional powerhouses of AFL, NRL and cricket, football is gaining fans across Australia. The A-League’s popularity grows steadily every year, with relatively new clubs such as Western Sydney Wanderers acquiring fanatic support. Football is consistently achieving better spectator numbers in Australia than rugby union.

Rugby union will always be able to count on its loyal supporters in Australia, but that fanbase will grow ever smaller unless Farr-Jones and his friends are heard. The Australian Rugby Union will be licking their wounds from their beating at the hands of England after a bruising tour of Europe, but the challenge will be far starker next year: how to resuscitate an ailing and increasingly irrelevant Wallaby shirt in Australia.