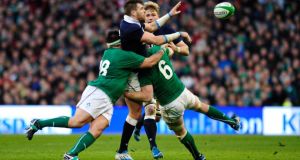 Ireland fullback Rob Kearney was delighted to make a winning start to this season’s Six Nations but warned sterner challenges lie ahead.

Ireland were comfortable 28-6 victors over Scotland in Dublin, with Kearney among the tryscorers as the hosts overpowered their lacklustre visitors.

Stand-in skipper Jamie Heaslip and Andrew Trimble also crossed the line as Ireland head coach Joe Schmidt enjoyed a win in his first Six Nations outing. However, with two-time defending champions Wales to come in less than a week, no one in the camp will be getting carried away.

“To get off to a winning start is something that every team wants to do, so we’re really happy with that,” Kearney told BBC Sport.

The hosts’ lead stood at 11-3 at halftime but it was a much-improved Ireland that came out in the second period and that fact was soon reflected on the scoreboard.

“We said we needed to go after them. We got a good try just before the half which gave us a little bit of breathing space,” Kearney added.

“We just felt that if we kept keeping phases and attacking them, we could keep building on it.”

Looking ahead to next Saturday’s clash with Wales, who opened their defence with a unconvincing 23-15 win over Italy on Saturday, Kearney added: “It’s a massive challenge for us. We are under no illusions.

“We have to recover really well now. There’s only six days, they’ve had an extra day to recover, so we certainly know it’s a massive, massive challenge coming.”

Heaslip, who took over as captain after illness ruled Paul O’Connell out of the game shortly before kickoff, was named man-of-the-match.

“We learned a lot in the November series and if we can make this place a bit of a fortress, we can go places,” he said afterwards. “It was tough losing Paulie this morning, he’s an unbelievable leader but we’ve got some great leaders in the team and we played with a lot of passion today.”