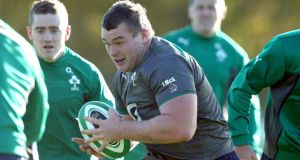 Rodney O’Donnell uses the words “quiet assassin” to describe Jack McGrath. It’s a term of endearment and there is no mistaking the warmth in O’Donnell’s voice as he offers a portrait of the prop as a young man during his schooldays at St Mary’s College to be precise.

The former Leinster, Ireland and Lions fullback has coached the senior cup team at the Rathmines school for many years, nurturing and cajoling outstanding young players who have gone on to represent Ireland at senior level. Tomorrow McGrath will join that select vestry, when he makes his debut against Samoa at the Aviva Stadium.

O’Donnell enthused: “He [McGrath] is a super bloke. It’s a fantastic achievement for him and we’re all thrilled. He took his rugby very seriously and demanded attention, in a good way at training sessions. He led the way, an example to his team-mates. Dave Breslin played a big part in Jack’s development. He was keen to learn and worked very hard to develop all facets of his game.”

Leinster Academy
McGrath’s talent – he was a member of the St Mary’s Seniro Cup side that lost the 2008 final 11-10 to Belvedere College – was recognised at provincial and national age-grade level that saw him graduate to the Leinster Academy.

It’s been a measured ascent that’s incorporated the various playing outlets that include the Ulster Bank League, British & Irish Cup, Heineken Cup, Amlin Challenge Cup and during the summer a trip to Georgia with an Emerging Ireland side for the Tiblisi Cup.

It was apposite Ireland coach Joe Schmidt should sit at McGrath’s right elbow for yesterday’s team announcement at Carton House because the New Zealander has been instrumental in the player’s development from his time at Leinster, a state of affairs that McGrath readily acknowledged.

“I think, with Joe [Schmidt], he was the one who gave me an opportunity initially and I’ll be forever grateful to him for that. The type of coach Joe is, he demands the best from every player and I think it brings the best out in every player.

McGrath also paid tribute to those who facilitated his progress to this point in his career. “In school, it was Richie Hughes when I was younger, and then Dave Breslin and Rodney O’Donnell coming up through [the senior cup cycle].

“Collie McEntee brought me into the Academy initially. Dave Fagan helped me out a lot there, and then as I came up [along the ranks at senior level] Michael Cheika; now Matt O’Connor has given me a bit of game time this year.”

It’s a little more than a bit in fairness, 361 minutes in eight matches, two tries and a man-of-the-match garland in the game against the Ospreys in which McGrath stared down Lions and Wales tighthead prop Adam Jones and didn’t blink.

Schmidt told him he’d be starting during the week but condemned him to a vow of silence. Well, not quite, he was allowed a single phone call to inform his family. McGrath explained: “I’m absolutely delighted. It is a great honour for me and the family.

‘Strict orders’
“I heard during the week but we were under strict orders not to tell anyone. That was the deal and we kept to it. I quietly told my family Wednesday evening.

“I told them to keep it to themselves. They’re fairly trustworthy people, I think.

“It’s exciting but there’s still a job to do. This is the first of three massive games for us as a squad, and I think the lads are just raring to go, get out there, impress the coach and most importantly get a win. They’re [Samoa] a very tough side.

“The spine of their team is from the [French] Top 14 and Premiership. They are two of the best leagues in the world. I’m looking forward to that challenge.”

On the evidence of what he has accomplished so far in his career to date, he has ever reason to.