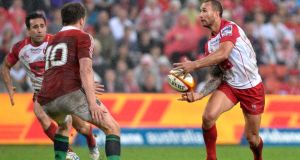 Quade Cooper in action for the Queensland Reds against the the British & Irish Lions at Suncorp Stadium in Brisbane on Saturday. Photograph: Bradley Kanaris/Getty Images

Australia coach Robbie Deans has confirmed that outhalf Quade Cooper will not have a place in his final squad for the Test series against the British and Irish Lions, while welcoming troubled back Kurtley Beale into the Wallabies fold.

Deans controversially overlooked Cooper for his initial 25-man squad named last month and on Sunday said the 24-year-old playmaker would not be among the final six players to be added to the group and named early this week.

“We’ve obviously not included him (Cooper) in the additional six at this stage, but as you’ve seen (with injuries), things happen quickly,” New Zealander Deans told reporters in Caloundra on Queensland state’s Sunshine Coast, where the Wallabies squad has assembled for a training camp.

“This is a three-Test campaign and nothing surprises you in this industry.

“Quade is a huge talent, we understand what he is capable of. We’ve now settled on the squad and we’ll get on with our opportunity.”

The Wallabies confirmed that Beale, who checked himself into a private health clinic last month to deal with “personal issues”, would be among the final six names added to the squad.

Beale had “presented himself in the right physical and mental shape,” Deans said of the 24-year-old playmaker, who was stood down by his Super Rugby side Melbourne Rebels for over a month earlier this year after punching two of his team-mates in an alcohol-fuelled incident in South Africa.

The five other players to be added remained under wraps but Deans gave a clue as to his intentions with a number of previously unnamed players turning up in Caloundra.

Livewire winger Digby Ioane is expected to be named in the final six, but remains in a race to be fit for the first Test in Brisbane on June 22nd after having knee surgery last month.

“Digby will move more this week ... and it’s just a matter of monitoring his progress,” said Deans, who added that former Wallabies flanker George Smith could yet play a part late in the series with his own knee injury recovering well.

The Wallabies could yet fly in more players from Perth where the New South Wales Waratahs defeated Western Force in their Super Rugby match on Sunday, a team spokesman said.

The most polarising selection decision is certain to remain that of Cooper, who a number of former players and pundits backed as an essential inclusion to face the Lions.

Cooper captained the Queensland Reds in their 22-12 loss in a tour match against the Lions on Saturday in Brisbane, and mixed patches of brilliance with a couple of glaring errors in his final chance to impress Deans.

Reds coach Ewen McKenzie, widely tipped to succeed Deans and no great friend of the New Zealander, praised Cooper for marshalling the Reds’ attack against the Lions and said he would pick the pivot “any week” were he the Wallabies coach.

Deans, however, said Cooper’s game had “probably just reaffirmed where we’re at.”

Local media have speculated that Cooper remains in the freezer for publicly criticising Deans’s game-plan last year. He also labelled the Wallabies camp as a “toxic environment” in an extraordinary attack on Australian rugby.

With Cooper out of the frame, the heat will be on 22-year-old James O’Connor, who Deans has anointed as his preferred outhalf despite the versatile and highly-talented back starting in the number 10 shirt just once.

Beale, the Wallabies starting outhalf during the season-ending northern hemisphere tour last year, could also play a role in the pivotal position, but would be more likely to start at fullback.