Pressure increasing on provinces as players vote with their feet 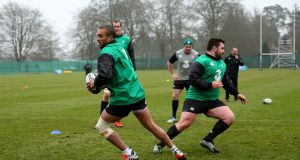 Munster’s Simon Zebo is attracting the interest of clubs like Toulouse while tighthead prop Marty Moore is leaving Leinster for Wasps in the English Premiership. Photograph: Dan Sheridan/Inpho

“I mean, let’s look at the margins that they’re losing these games by. No one’s being blown off the park.” – David Nucifora, the IRFU Performance Director, late December 2015.

An icy breeze has blown through Ireland this past week. The Munster players, largely stranded outdoors, would have felt it more than most.

The Nucifora comment above shows how quickly a perspective can be altered, coupled with the need to be flexible enough to adapt. That the light-bulb did flicker enough for someone (possibly Nucifora or even Joe Schmidt) to temporarily reroute Andy Farrell to Munster – in an undefined advisory role – shows the IRFU are feeling a southern chill in their bones.

Leinster woes are hardly dissipating either.

As word seeped out about Marty Moore heading to Wasps in the English Premiership, we also heard that Nucifora is in Australia until January 23rd, effectively stalling all the primary contract negotiations (not that any tighthead prop has been offered a national deal next season).

Of course Irish players and their agents can continue to speak, or even sign, with French and English clubs.

The long-feared increase in the exodus of players from this island is becoming a reality. Just not those on national contracts, of which there are fewer. It’s those players only being offered provincial contracts under inexperienced and in Munster’s case malfunctioning coaching teams that are seeking to ply their trade abroad.

“In the last 12 months the UK market has changed significantly,” said Moore’s agent, Niall Woods. “They are making offers that are much more competitive than before which is helped by the strength of sterling against the euro.”

Seemingly, Ian Madigan and now Moore, and possibly Simon Zebo, are emigrating for rugby reasons as much as they are leaving for more money.

Nobody on the outside seems to know the exact player budget for each Irish province or how much the IRFU supplement provincial wages.

We know Connacht’s budget is a fraction of the other three, we know that Ulster can operate in a fluid enough environment to keep the players they want – that crucially includes those below the national contract radar like Craig Gilroy and Rob Herring.

“We do our business behind the scenes and we’ll go hard after the guys we want to keep in particular,” said Leinster coach Leo Cullen.

But the inability to bring in Stephen Moore, regardless of the circumstances, and JJ Hanrahan’s departure last summer looms large over this shaky Fitzgerald/Foley regime. There’s no need to rehash last season’s leaked email mess.

Now, what is clear for all to see is the IRFU High Performance department’s proposed shifting of players between provinces is being rejected by the likes of Madigan, Moore and nameless others.

Munster are in clear need of a reliable place-kicking outhalf and tighthead prop to replace BJ Botha next season.

This evening Leinster continue to soldier through the worst European campaign in their recent history with Cullen fielding a largely futuristic looking line-up against Bath.

But even the loss of Moore, who will be coached in Wasps by former Wales and Lions loosehead Dai Young, is offset by Mike Ross signing a one-year extension and Tadhg Furlong accepting a two-year deal.

“From the conversations I have had with him (Zebo), I would say I would be very optimistic,” said Fitzgerald this week before adding: “But I would say there is probably other optimistic people around as well.”

Toulouse are believed to be front of the queue to sign the inconsistently brilliant winger.

Madigan and Moore moving to Munster under national contracts would have been a clear indication that Nucifora was calling the shots but these young players are understandably making the best decisions for their personal development.

“We’re not going to direct them,” said Nucifora last month. “Obviously we want to keep them in the country.

“We do a lot of work with the provinces to try and help them maintain and keep players. We don’t advertise that, but obviously we do, because it is a two-way thing. We need to work together to be able to keep guys here.

“We’ve got some significant challenges in challenging the cheque books of the UK and French markets, and so we have to play it smart in how we do our business, and that’s what we try and do.”

The player salary cap in France is €10 million but the likes of Toulon find ways around that. In the Premiership it is £5.5 million which increases to £6.5 million for clubs that can afford up to two extra marquee signings.

Nucifora, in December, also explained how he inherited a masterplan that needed reshaping.

“Plan Ireland was a document done by people in the professional game before I got here, the strategy document that has been written over the last few months is endorsed by the national professional game board that came about as part of Plan Ireland to help us move the game forward here. The four provincial CEOs sit on that board, IRFU CEO Philip Browne and some external independent people sit on that as well.

“A lot of the things that we need to now activate and change in how we do our business aren’t going to be palatable for everyone all of the time and I suppose we need to be able to work together with everyone in Irish rugby to make some of the changes in the areas to ensure we don’t have a situation where we don’t have the ability to get the players playing where and when we want them to play.”

He gave the example of Ian Madigan (just a week before he announced his move to Bordeaux).

The IRFU could yet be forced to change their entire policy with regards to national selection. It seems likely that selection for Ireland will not be impeded so long as Madigan is kicking the lights out in the Top 14 and Moore grows into a durable Premiership scrummager.

Another serious threat to the provinces is crystallised by the structural improvements – from coaching to medical – of many French and English clubs.

“That’s the kind of competition we are up against so for four years London Irish, under the old ownership, didn’t invest anything so it’s been a steady, steady decline. It will take years really for us to get back up to where we want to be.”

So a tough road ahead?

“Ah it is, but I’ve got good people here around me now. We will progress this season and then next season we can be a lot better with who we have coming in. We have already signed good players, with really good rugby IQs who have got leadership attributes as well.”

Ulster are matching market value in order to keep their players. They have a solid revenue stream from their new stadium and appear to have the option of private equity.

Leinster certainly do in the shape of Denis O’Brien for Johnny Sexton’s recent contract and Bank of Ireland partially covering Jamie Heaslip’s salary.

One way of stopping the player drain is private equity. But it’s going to take very generous and wealthy supporters of Irish rugby to make large investments for a small stake with no real decision making power.

There was interest not so long ago around similar investment in Munster but they couldn’t get it over the line.

Linfield could get bye after opponents placed in quarantine 19:19
Champions League feast awaits but no party time in Lisbon 18:44
Athletics Ireland confirm nine sessions for National Championships 18:02
Trump prefers Jordan to James because ‘he wasn’t political’ 16:45
Judd Trump tips Kyren Wilson to succeed him after falling to the ‘Crucible curse’ 13:09
Crossword Get access to over 6,000 interactive crosswords