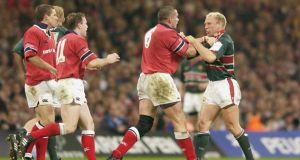 Munster’s Alan Quinlan wrestles with Leicester’s Neil Back during the 2002 Heineken Cup final at the Millennium Stadium in Cardiff. Photo: David Rogers/Getty Image

meeting than their most memorable Cardiff coming together back in 2002.

It was the Heineken Cup final and Munster had one last chance of an attack, with a scrum deep in Leicester’s half.

As Stringer went to feed the ball in and the referee was unsighted, Leicester flanker Neil Back reached across and illegally slapped the ball back onto the safety of his side of the scrum.

The dark arts of the flanker caused the turnover, which resulted in the game coming to an end shortly afterwards and Leicester winning the Heineken Cup.

“One hundred per cent, it wasn’t a practised skill. It was an autonomous reaction to what was in front of me,” said Back at the launch of the TV3 World Cup coverage.

“In the game as it is today that would be picked up by the TMO and the consequences would have been borne but they weren’t about then.

“If any member of the rugby writers or players can say that no one on the Munster side did anything against the rules in that game and got away with it then I’ll have a different opinion but we all know that’s not the case.”

For the former England and Leicester flanker, it’s a case of poacher turned gamekeeper as he will analyse the games and point out any misdemeanours as they arise. Doubtlessly, he will occasionally perform it tongue-in-cheek.

“There are always different opinions on it: positives and negatives,” he says of the famous slap. “Peter Stringer is a great Irish player who is still playing today and he has never allowed that to happen to him again so in terms of skill development I have helped Munster, Ireland and the British and Irish Lions because Peter is a better player for it.”

Back, who defied the popular view that relatively small flankers couldn’t survive in a modern rugby world, isn’t without a vein of mischievousness

“The down side is that I have to polish two Heineken Cup winners’ medals, which takes a bit longer,” he says.

Back believes Ireland are a more settled team than England for this weekend’s clash and Joe Schmidt should present a more stable Irish team with more depth than England currently possess.

The England outhalf, George Ford, he points out, has only eight caps and the winning of the game is all about playing the pressure correctly.

“Sunday will be an indication of where both teams are ahead of the World Cup,” said Back.

“Neither England or Ireland are afraid to win ugly. They’re not afraid to build pressure through the scoreboard: three, six, nine. Both teams will create pressure in the opposition’s third and with ball in hand they are incredibly dangerous.”